Versatility has been a defining aspect of Patina Miller’s career—both onstage and on the red carpet. The Tony winner was a Broadway household name before she was cast in the blockbuster film franchise The Hunger Games and the television series Madam Secretary, and she has performed in everything from a nun’s habit to a business suit to skintight spandex. And her red-carpet outfits have encompassed a variety of styles as well—from slinky, skintight red-carpet dresses to sophisticated ballgowns.

And cashmere jumpers are part of her daily wardrobe mix, too, I learn when I sit down with Miller at a Chelsea coffee shop. It’s a cold winter day, and the actress has dressed for the weather in a cashmere jumpsuit from Urban Outfitters, paired with stylish black boots. Miller is visibly excited about her style and very aware of her choices, something that began when she realized how clothing affected her performance at auditions.

“It’s the whole package,” she says. “When you go in and present yourself at an audition, it’s about wearing things that make you look and feel your best. It plays a pivotal role, I think, in the whole process. Early on I started to get the idea, ‘What do I want to convey to those people across the table? Do I want to wear something I’m self-conscious in, or do I want to wear something that shows my style and shows who I am?’ At least I can walk into these rooms with my head held high and do what I need to do.”

After appearing in Hair in 2008 at the Delacorte Theater in Central Park, Miller starred in the London and subsequent New York production of Sister Act as nightclub-singer-turned-undercover-nun, Delores Van Cartier, a performance that marked her Broadway debut and earned her her first Tony nomination. She returned to Broadway in 2013 as the Leading Player in the revival of Pippin, for which she won a Tony.

Before strutting onstage at the Music Box Theatre, Miller would don a skintight outfit of black spandex, including velvet boots with three-inch heels. The clothes enhanced her sultry performance and also showed off her svelte, athletic figure. Her muscular arms earned their own Twitter account, and her exercise routine was written up in the New York Times. When asked if she selects outfits that will show off her toned physique, Miller laughs and says, “Yeah! I like to pick things that I work my butt off for.”

When she’s not lifting weights, Miller can be found relaxing in boyfriend jeans, tank tops, and oversized sweaters—sometimes adding one of her husband’s button-up shirts. “You’ll probably find me in workout clothes more than anything during the week,” she says, adding, “I don’t like clothing that restrict me. I’m all about being as relaxed as I can be.”

But she didn’t dress down for the 2013 Tony Awards, when she accepted her trophy at Radio City Musical Hall dressed in a full-skirted pastel dress by Zac Posen. “I said, ‘I want to look like the belle of the ball. I want something big. I want something lush,’” Miller recalls, adding that her immediate reaction upon seeing the gown on a mannequin was, “That’s a lot of dress!”

“For Sister Act, I wore something slinky and sexy,” she says of her first Tony Awards ensemble. “So I said, ‘Let’s find something grand.’ I saw all the tulle and thought, ‘This is it. I’m going to be taking up three seats with it. If I don’t win, I’m going to look like a winner. Whatever happens I want to look and feel good.’”

The full-skirted gown did pose one challenge for Miller, who admitted to feeling some trepidation about accepting her award and the possibility of falling as she approached the stage — something her Hunger Games co-star Jennifer Lawrence famously did when she climbed the steps to accept her Oscar. 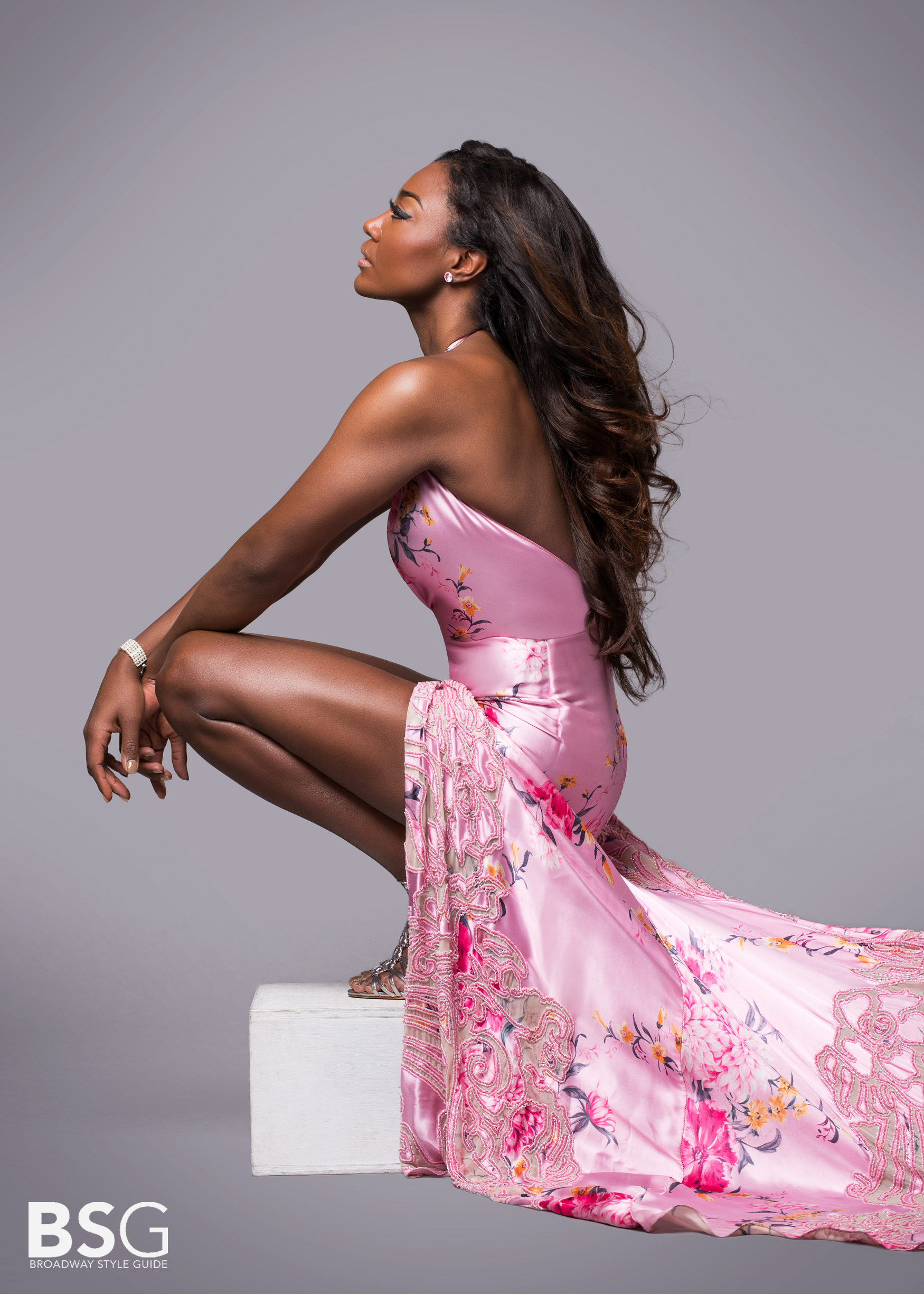 “I don’t even know how I did it honestly,” she says with a laugh. “The moment they called my name I freaked out and thought, ‘Don’t fall, Patina.’ I picked up that skirt so quick. I was so worried, [thinking], ‘It’s going to happen to me, of course. I’m going to face plant.’”

As Miller’s star has risen, starring on a primetime TV show and sitting in the front row of Fashion Week shows, she has striven to be a role model for young women and girls—especially her two nieces. They call her “Auntie Tina” and attended their first Broadway musical as toddlers just to see their aunt onstage.

“I try to be such a great example for them and introduce them to the arts,” she says with a smile. “To do that for them and give them that experience and see me onstage — it gives them that drive that maybe they could do it. For me, being an artist and doing this thing as a woman of color, it’s always been about encouraging the younger generation that they can do it. It lets you know this is possible. Get them confident young, man. It’s so important.”

Another way Miller hopes to inspire confidence in her young fans is to play a Marvel superhero, something she discusses frequently with her trainer. While she said she’d be happy with a variety of roles, one of her top choices would be She-Hulk.

There’s no doubt Miller could handle the action aspect of the films, so the next question—aside from if she would want Joss Whedon to direct, followed by a quick discussion of our mutual love for Buffy the Vampire Slayer—is how she envisions her ideal superhero costume.

“We found out at the photo shoot that cobalt blue looks good on me,” she said. “Blue is powerful. Purple is very powerful and royal. Look at Mystique in X-Men. She’s fierce. I would want to be a bad-ass for sure.”

Whether it’s a flowing pastel ballgown or a skintight black ensemble, Miller is eager to embrace the festive and playful aspects of fashion as well as the ways in which clothing can empower women working in entertainment. A recent red-carpet trend she has embraced is the social media hashtag #AskHerMore.

“Fashion is so fun,” she says eagerly. “I want there to still be the element of fashion and have that be a focus. But let’s start asking really great questions, positive things. Young people that see these things look up to these people. Hopefully it’s just women being themselves and being real and being who they are.

“Hollywood is a very male-driven field,” she continues. “It just is. They say sex sells. No wonder everyone’s trying to alter the way they look because they want to be young. Everyone says you’ve got to be young. I’d like to see that change and see people enjoy being themselves and enjoy the things that make them them and loving every part of their body.”