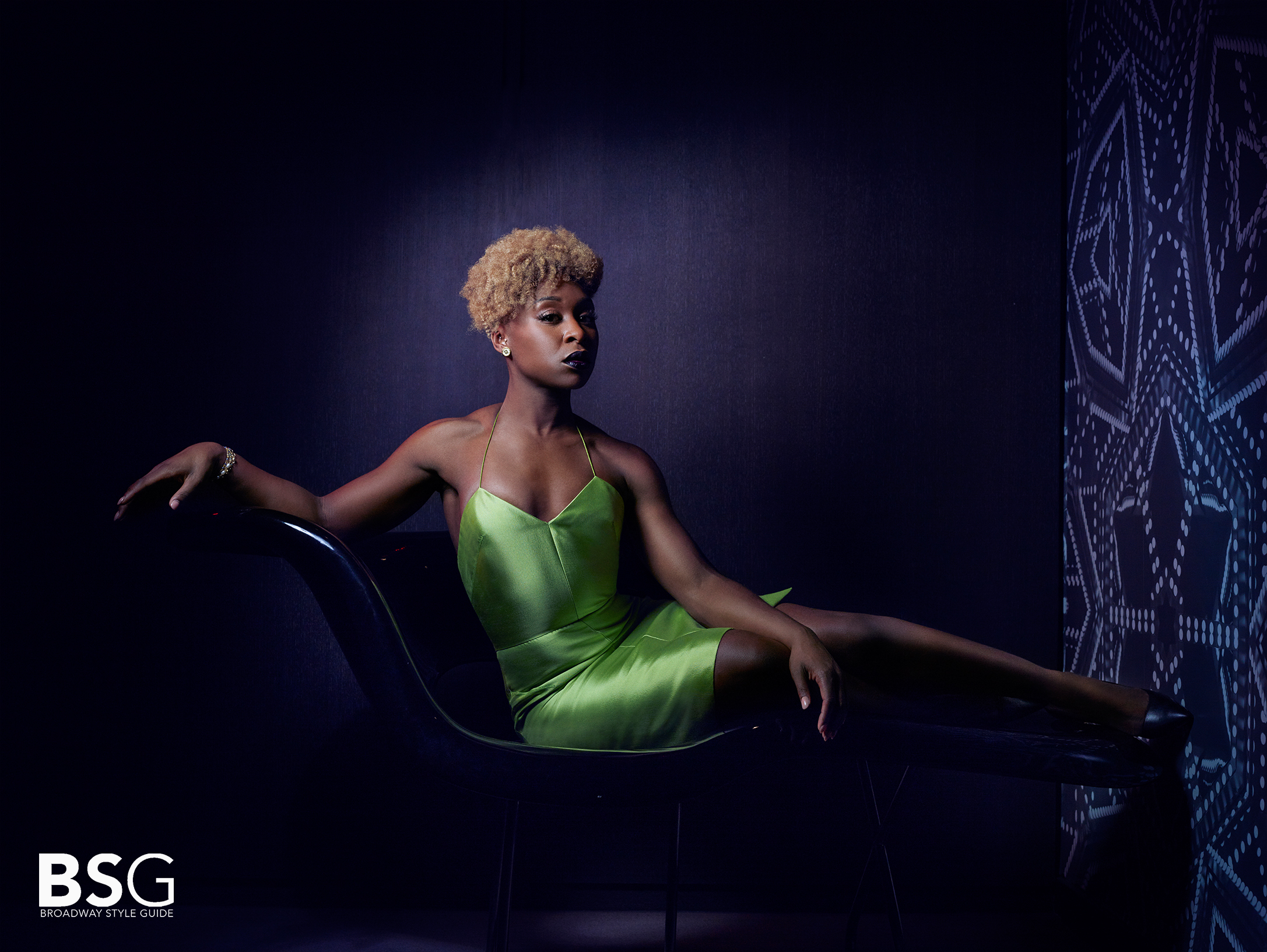 Erivo met Goldberg briefly while doing Sister Act, but it wasn’t until the revival of the musical based on Alice Walker’s novel opened on Broadway that the two got to have a “proper meet,” as Erivo says. Meeting celebrities backstage post-show is a regular occurrence, with stars like Oprah Winfrey and Steven Spielberg paying visits, but Erivo says meeting Goldberg was overwhelming because she’s “lived with her for so long.”

On the wall of her dressing room at the Jacobs Theatre, where the show is currently running, hangs a large, gold, antique-looking frame, with cards hanging in it. Near the center, a blank card with typewriter font reads: “Thanks for making Celie shine. You’re a true talent. Thank you for a wonderful evening. Love, Whoopi”

There’s also a dried bouquet of pink roses from Goldberg hanging in the center of her window, flanked by dried white roses (from Aretha Franklin) and another bouquet of purple flowers (from a producer). “I just think they freeze in time and end up being a different kind of beautiful,” Erivo says.

Her tiny dressing room on the second floor of the Jacobs has a palatial feel. She worked with Mark Harrison, who designed her Purple co-star Danielle Brooks’s space as well, on the room’s look. When I walk in, she’s cross-legged on an ivory chaise, and I sit in her makeup chair, which looks like it belongs in one of King Louis XVI’s sitting rooms. “I wanted a chair that makes me feel like a queen,” Erivo says, using female pronouns to refer to her throne.

Two accents that Harrison didn’t pick out are the throw pillows on the chaise with Erivo’s face screen-printed on them, an opening night gift from Jennifer Hudson, who plays temptress and Celie’s friend Shug Avery in the musical. (Hudson has similar pillows in her room and gifted some to Brooks as well.) 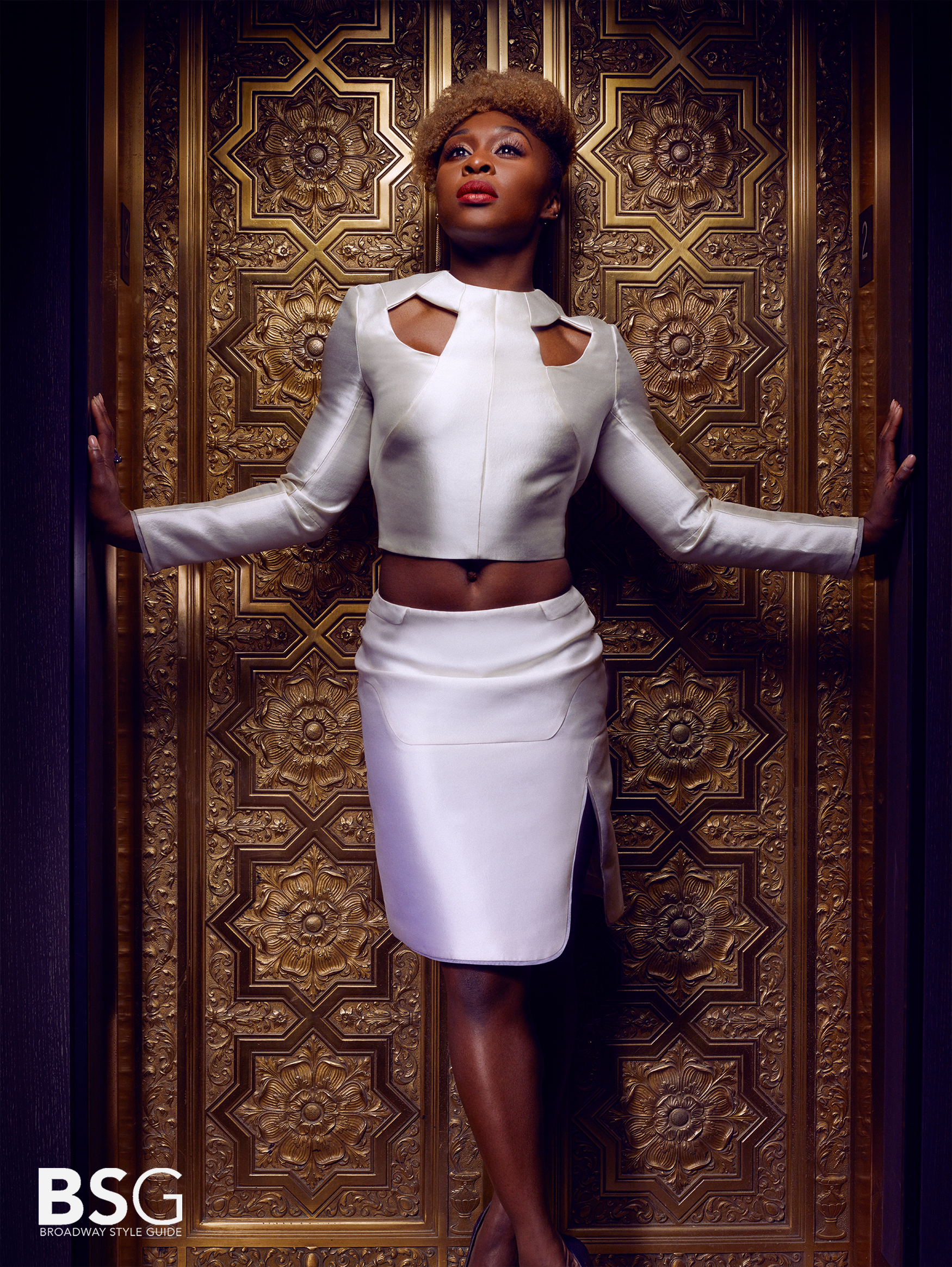 Erivo started with the show at Menier Chocolate Factory in London, and when John Doyle’s production of Marsha Norman, Brenda Russell, Allee Willis, and Stephen Bray’s musical was announced for Broadway, Erivo was the only actor to come to New York with the show. “It was slightly overwhelming, at first, but everyone here has been so lovely and they’ve also taken me in under their wing—it feels like a family,” she says, adding that she still talks to her London cast. “I feel like I have a responsibility to make sure that I represent myself and my cast well.”

If the New York press and the audiences have anything to say about that, she’s representing herself with aplomb. The production received across-the-board raves, with Erivo’s performance singled out with rapturous mentions. When asked if she read the reviews on opening night, she says she had no way to avoid them.

“That was something I wasn’t used to,” she says, as the critics attend opening in London and the notices come out later. (On Broadway, critics attend press previews and reviews come out online when the opening curtain falls.)  “The most wonderful things were being said about what I was doing onstage and to really realize that’s what I was doing on stage, ‘cause I was just doing the work I know how to do.”

But she already had a pretty good inclination that people like the show, as almost every night, she receives a standing ovation after she sings Celie’s 11 o’clock number, “I’m Here.”

“I never expect it, I never ask for it because I feel like that’s not what it’s about,” she says. “If it happens, it happens. If it doesn’t, as long as I’ve told the story, I don’t mind.” She does say that audiences are more vocal in New York than in London, however,  and the reaction has “intensified 10-fold.” “It feels like a house of people who have come together to pray,” she says. “It literally feels like a spiritual experience.”

And she has her own pre-show rituals. She likes to get to the theater early before a show, and as we talk, she secures her wig cap over her cropped blonde locks. Her hair has been short for about four years, and the blonde became progressively lighter as her move to New York approached. (She says it’s about to get even lighter in the coming weeks.)

She says she gravitates toward “masculine haircuts,” as she enjoys experimenting with gender in her style. “I like the idea of playing with the masculine and feminine together,” she says. “To have super masculine clothes but wear a huge heel with it—just to play and see how far we can go.”

However, playing a character who is constantly called plain and ugly can wear on a person, but Erivo says she has to “put Cynthia to the side” when she’s onstage. “She’s been told so many times that it’s just something she hears and believes and is ok with—she doesn’t actually know anything different,” Erivo says of Celie’s journey. “It’s not that she isn’t lovely. It’s that she’s had all the weight of the world on her constantly and hasn’t had a chance to be lovely. If you don’t know something, you can’t work with it.”

And Erivo is all about embracing yourself for who you are. The day before our interview, she posted a close-up selfie on Instagram, with a caption that reads: “Big lips, big nostrils, big eyes, blonde hair, when I smile I have a gap between my two front teeth!! I love it all. Choose today to say, I LOVE ME. Tag me in your picture up close and personal and you might just get a special message. #iloveme.”

She shows me the pictures some of her 14.7K followers have tagged her in. “This is a really good moment for people to start accepting everything and their flaws,” she says. “Too often, there isn’t enough emphasis placed on congratulating yourself and going, ‘Actually, I’m okay with what I look like and who I am. Maybe those things that are quirky make me beautiful.’”

One of her most distinctive characteristics is the gap between her front teeth, and when asked if she has always loved her smile, she immediately says, “I love my gap. I kind of wish it was slightly bigger. I’ve never ever wanted it closed.” Only one person has told her to close it because it might limit her roles, but she refused. “It’s what makes my smile my smile,” she adds.

In Nigeria, where both of her parents are from, a gap in the teeth is a symbol of beauty and wealth, and she likes showcasing her roots in her fashion choices. She recently did a panel at the Schomburg Center for Research in Black Culture, and she wore an African print shirt made by her aunt. Erivo loves structure in her clothing, and since her aunt knows she’s into style, she’ll add quirks to the pieces, like a high-neck or a large collar. “She knows sometimes I like messing with androgyny and masculinity and she just picked it up and went with it,” Erivo says, adding that her aunt’s shirts are her summer staples. 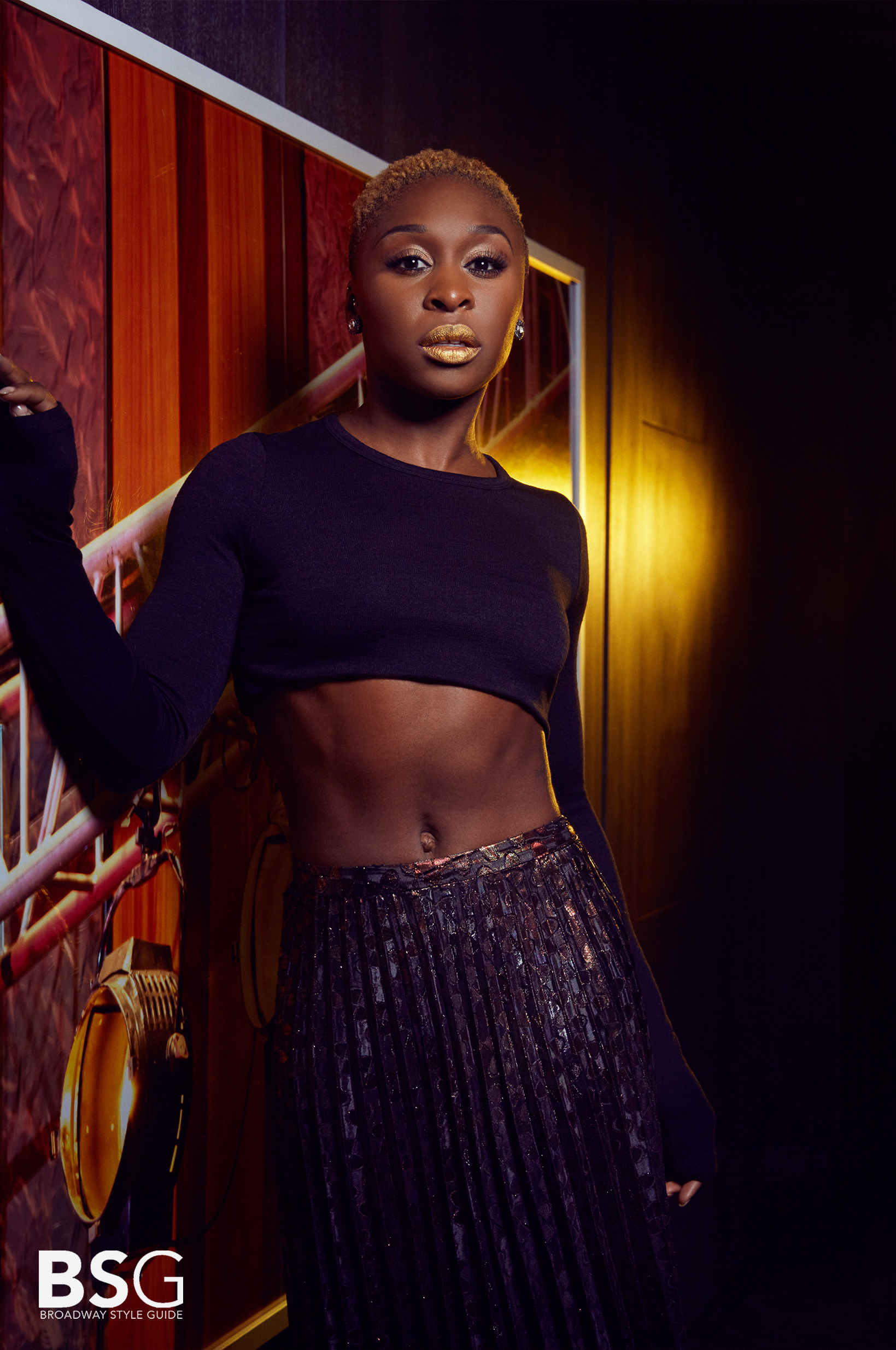 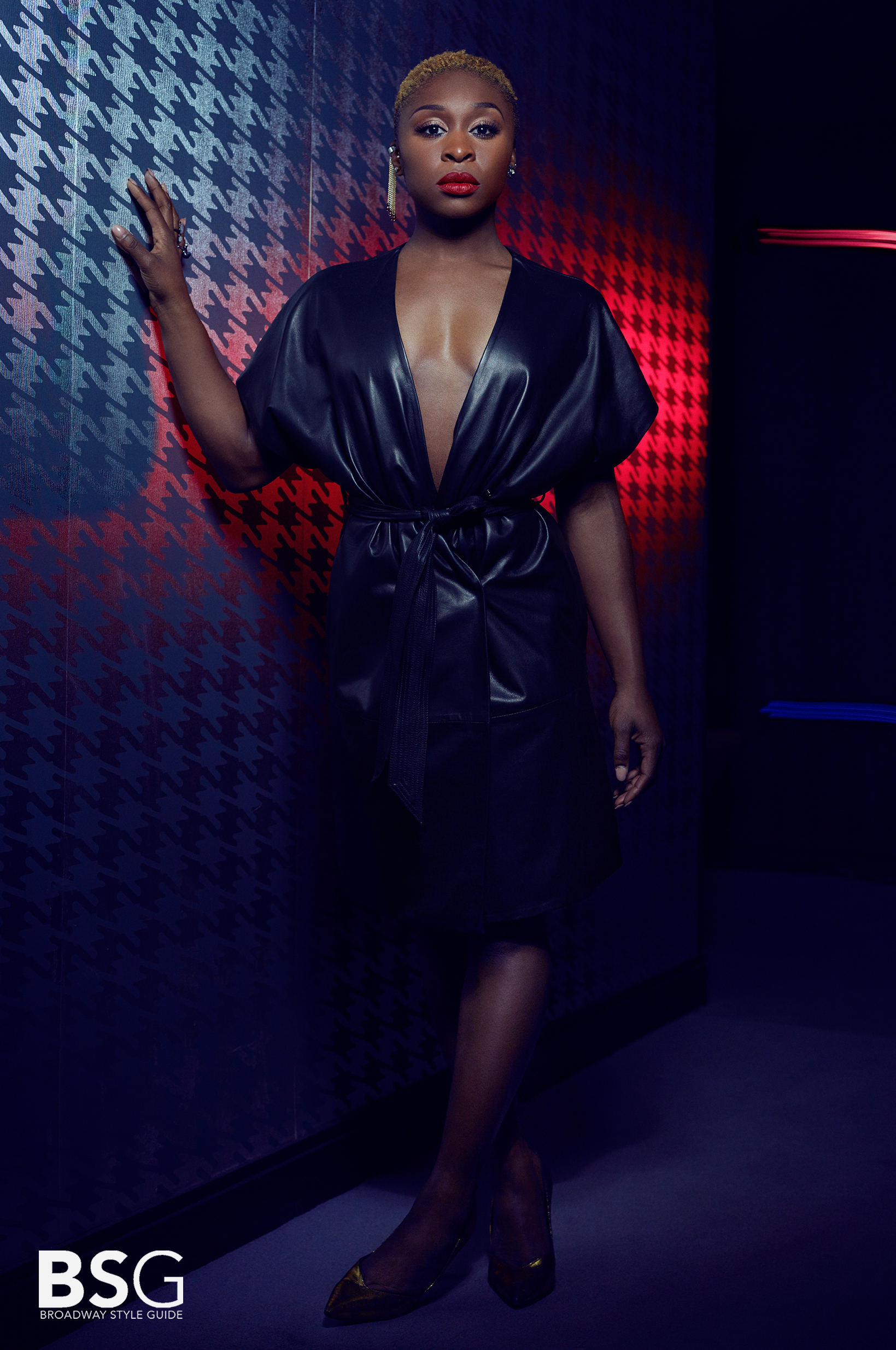 Erivo lives in Williamsburg, which reminds her of the London neighborhoods of Soho and Shoreditch. When asked if she knows the word “hipster,” she responds, “I think we invented it in Shoreditch!” And she considers herself a bit of a hipster, too, as she’s always carrying around her glasses for reading. “I don’t wear flannel shirts, though,” she says.

One of her hipster habits? Knitting. She took it up while in school at The Royal Academy of Dramatic Art. She was bored out of her mind at tech rehearsal, and someone brought in knitting needles and wool and taught her how to knit and “that was it.” One of her favorite creations is a huge, hot-pink, slouchy bobble hat.

She’s not wearing any of her own knitwear on this freezing day, but she refuses to sacrifice style in cold weather. Today, she’s sporting a black romper—which looks like leggings and a cami—under a black, chunky sweater. Her shearling-lined Marc Jacobs boots are in the corner and her grey coat is hanging, and her fur hat makes the outfit, what she calls, “Russian chic.”

“I always choose an outfit, even if it’s super laid-back,” she says, adding that she sees fashion as an extension of her artistry.

As we continue “nattering,” she lists off some of her favorite designers: Michael Kors, Dior, Acne, Balenciaga, Mulberry, Chanel, and Zac Posen. She was introduced to Posen’s work through her PR team, and she wore a fitted, white dress from his line to The Color Purple opening. The statement of that look, though, was her blue lipstick. Her makeup artist created a custom color just for her. “You can always pick up an outfit with what you have on your face,” she adds.

Erivo’s also an exercise fiend, and her Instagram feed boasts some intense training videos and photos of yoga contortions. She works out with a trainer, and her go-to activewear clothing brands are Lululemon and Adidas. When I mention that she should check out one of my favorites, Outdoor Voices, and she immediately looks them up on her iPhone. “These are great,” she says. “Now, I’m a fan.”

Whether it be working out or performing, Erivo is goal-oriented in everything she does. And performing on Broadway is just one of the many things she hopes to accomplish. She also writes and records her own music, and she released the album, “Cynthia Erivo & Oliver Tompsett Sing Scott Alan,” at the beginning of the year.

She’d also like to make her way into TV and film, and feels like her growing profile from The Color Purple is “opening doors and windows.” Erivo is already being talked about as a frontrunner at the Tony Awards, which will take place in June, and that just might give her one more thing in common with Whoopi.

“There are many goals, really, ‘cause I think if this was the only one, there’d be the no reason to continue,” she says. “I’ve always believed that anything is possible—I just didn’t know how possible it was.” 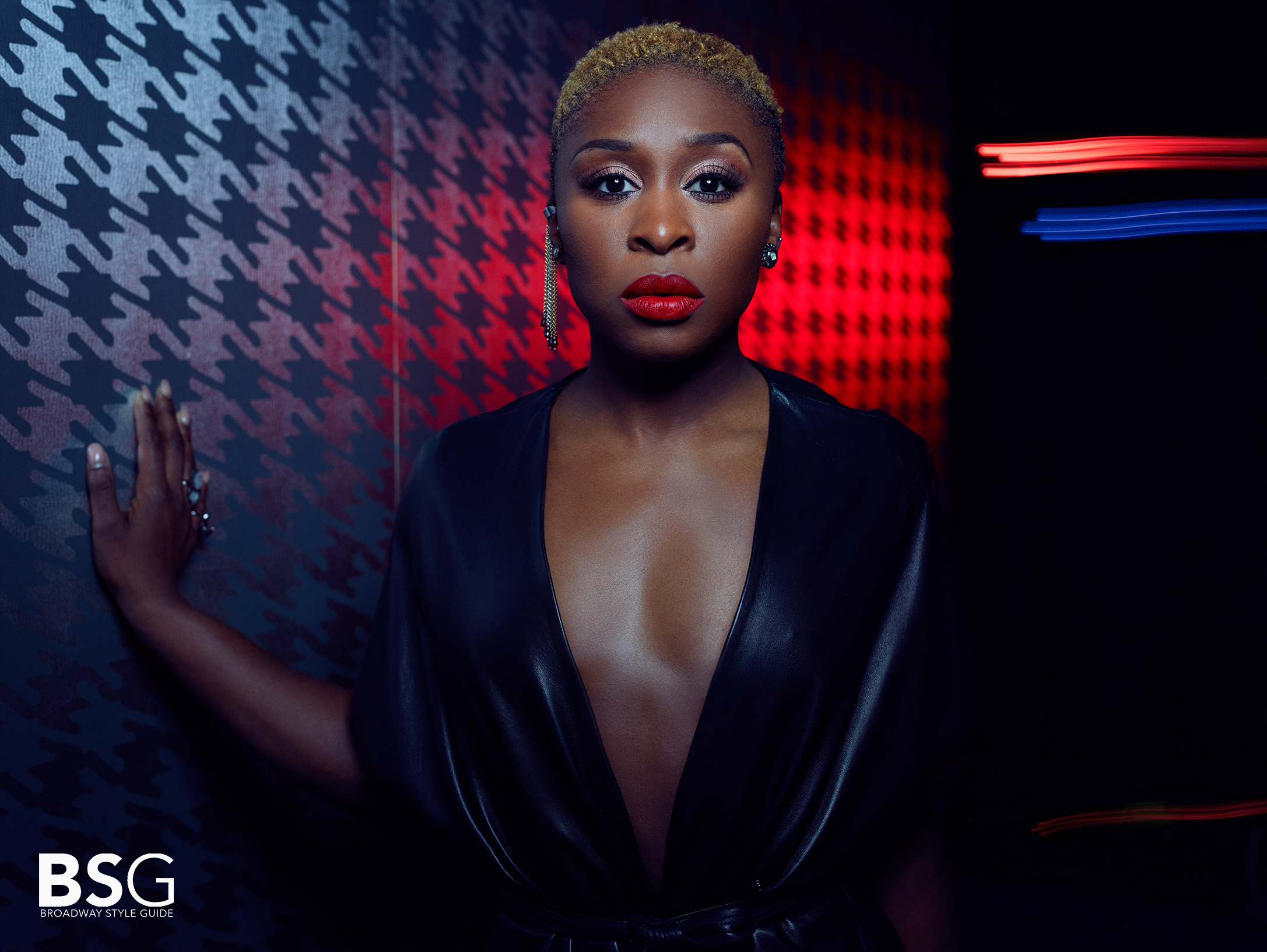