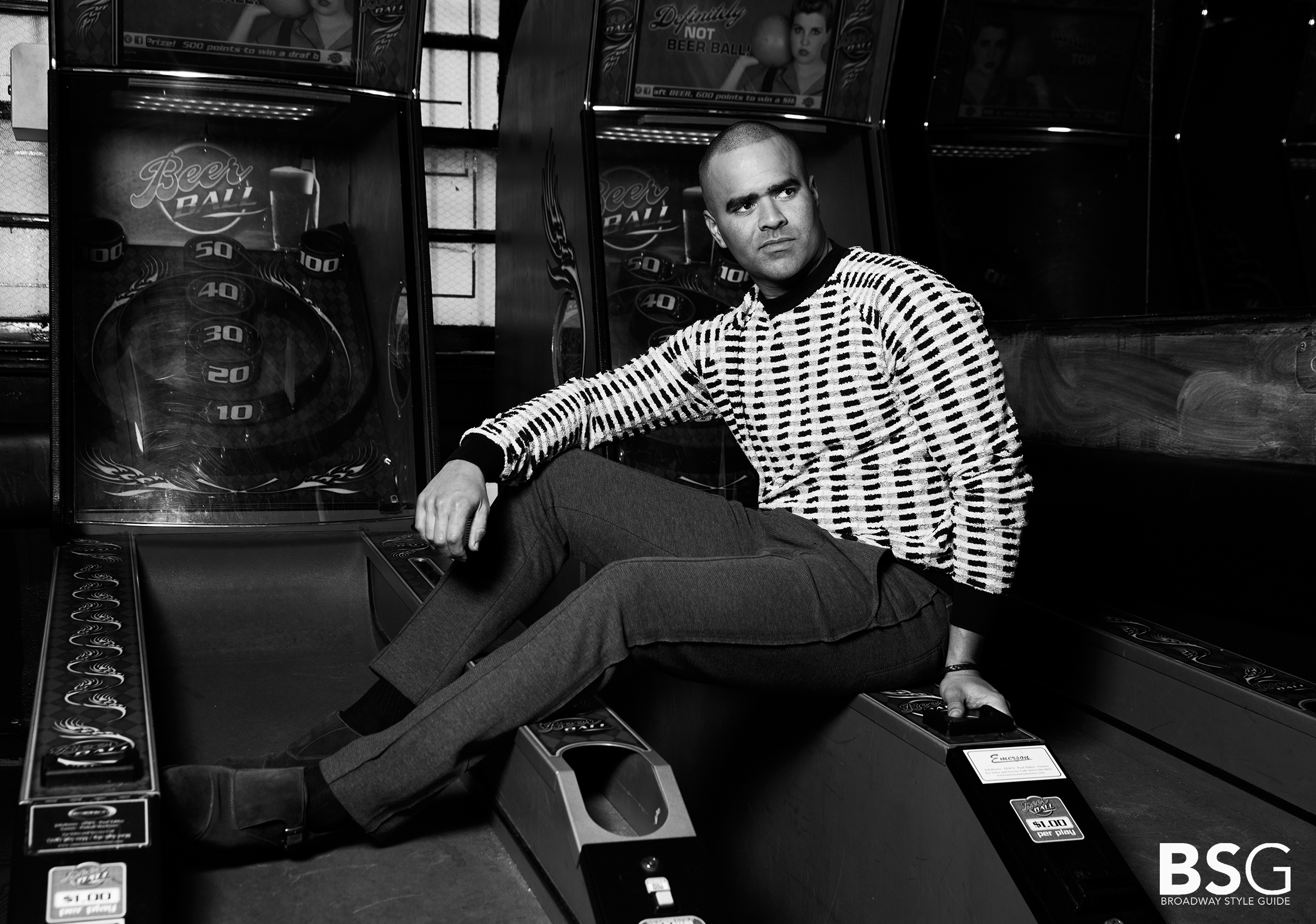 “This is how it happens—a nice smile and then a hustle.”

Christopher Jackson and I are playing pool at Bar Nine in Midtown Manhattan and he’s convinced I’m about to beat him. He’s a gentleman, though, so he couples his fears with flattery. Or is that part of his game?

Whatever he’s doing, it’s working, as the charming actor has the uncanny ability to disarm anyone in his presence. However, he does make sure to state, for the record, that he hasn’t been playing a lot of billiards, lately. Frankly, he hasn’t had much time for anything, as he’s starring in that little-known-blockbuster Hamilton on Broadway, as America’s first president.

Hamilton reunites Jackson with his longtime collaborator Lin-Manuel Miranda, who wrote the music, lyrics, and book for the hip-hop musical about the titular founding father. Jackson starred in Miranda’s other Broadway hit, In the Heights, in 2008, and the two are also part of the improv rap troupe Freestyle Love Supreme.

Jackson first heard of Miranda when a college classmate encouraged him to meet the writer—but he was skeptical. “I had this vision in my head—there are grown-ups that write shows, and they all look like Stephen Sondheim and Stephen Schwartz,” Jackson says. “So when I walked in the room and I see this kid sitting behind the piano at the Drama Book Shop, I’m like, ‘What’s going on?’ He hands me a sheet of paper with some lyrics on it—not sheet music—and, again, in my head, I’m like, ‘Okay, what kind of amateur am I working with?’ But he had written this rap, and I learned it and I was like, ‘What else do you have?’ And from then on we’ve just been brothers.” 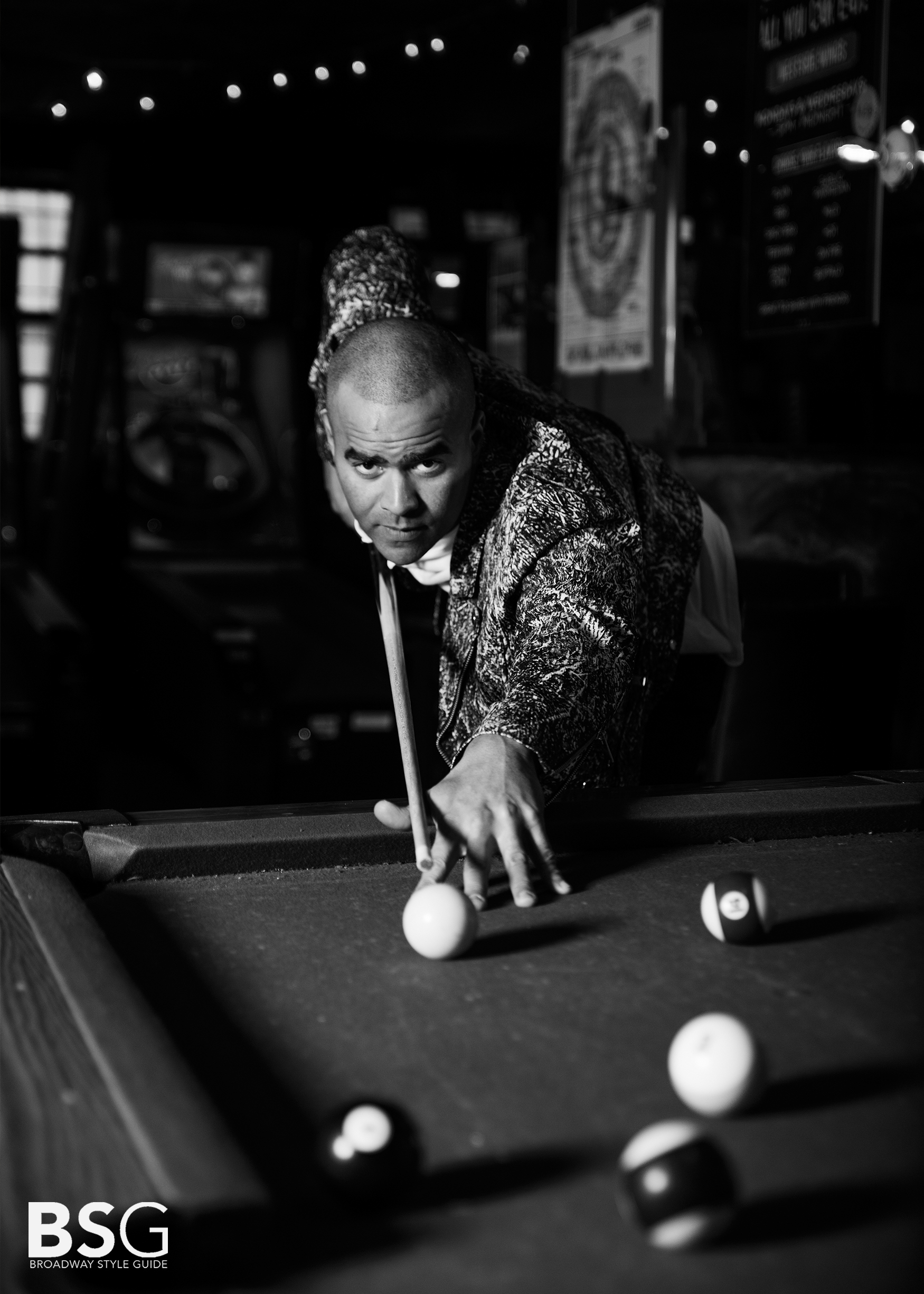 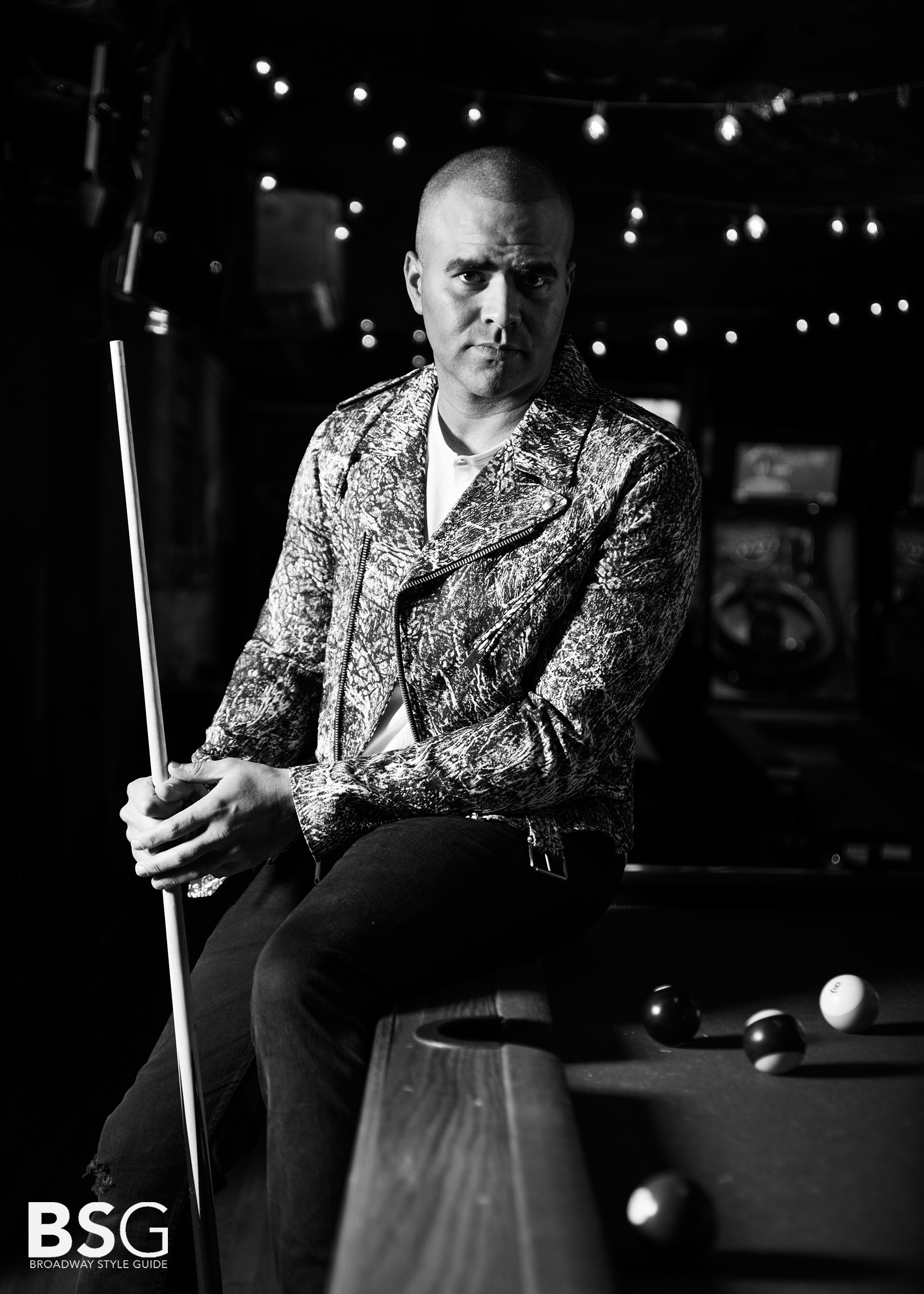 The rap was an early draft of a song from Heights, and the two have worked together so intimately that Miranda actually wrote the role of George Washington in Hamilton with Jackson in mind. “He knows my musical influences; he knows the kinds of turns that I like,” Jackson adds.

Just then, he hits one of his balls directly into the pocket, with force. I’m impressed, but he’s humble. “Let the record show, it was an easy shot,” he says.

Jackson calls himself a “product of his generation” when it comes to the music he likes. He grew up in southern Illinois so everything from Biggie and Common to Donnie Hathaway to gospel and country run through his blood.

He’s also an avid reader, and is currently flipping through David Maraniss’s Once in a Great City: A Detroit Story and also just purchased Jonathan Franzen’s new book, Purity. But the tome that hasn’t left his shelf since he started working on Hamilton, is Ron Chernow’s biography of George Washington. (Chernow wrote the biography of Alexander Hamilton which inspired the musical, and he serves as the show’s historical consultant.)

“The more I understand it, the more every night I can come in with a different idea,” Jackson says. “That’s what keeps my mind engaged…Because people have waited six months to see this show. They deserve to see something fully engaged.”

At this point, I hit a ball into the pocket, and Jackson goes, “You are hustling me!” Little does he know, the ball I just pocketed was one of his. 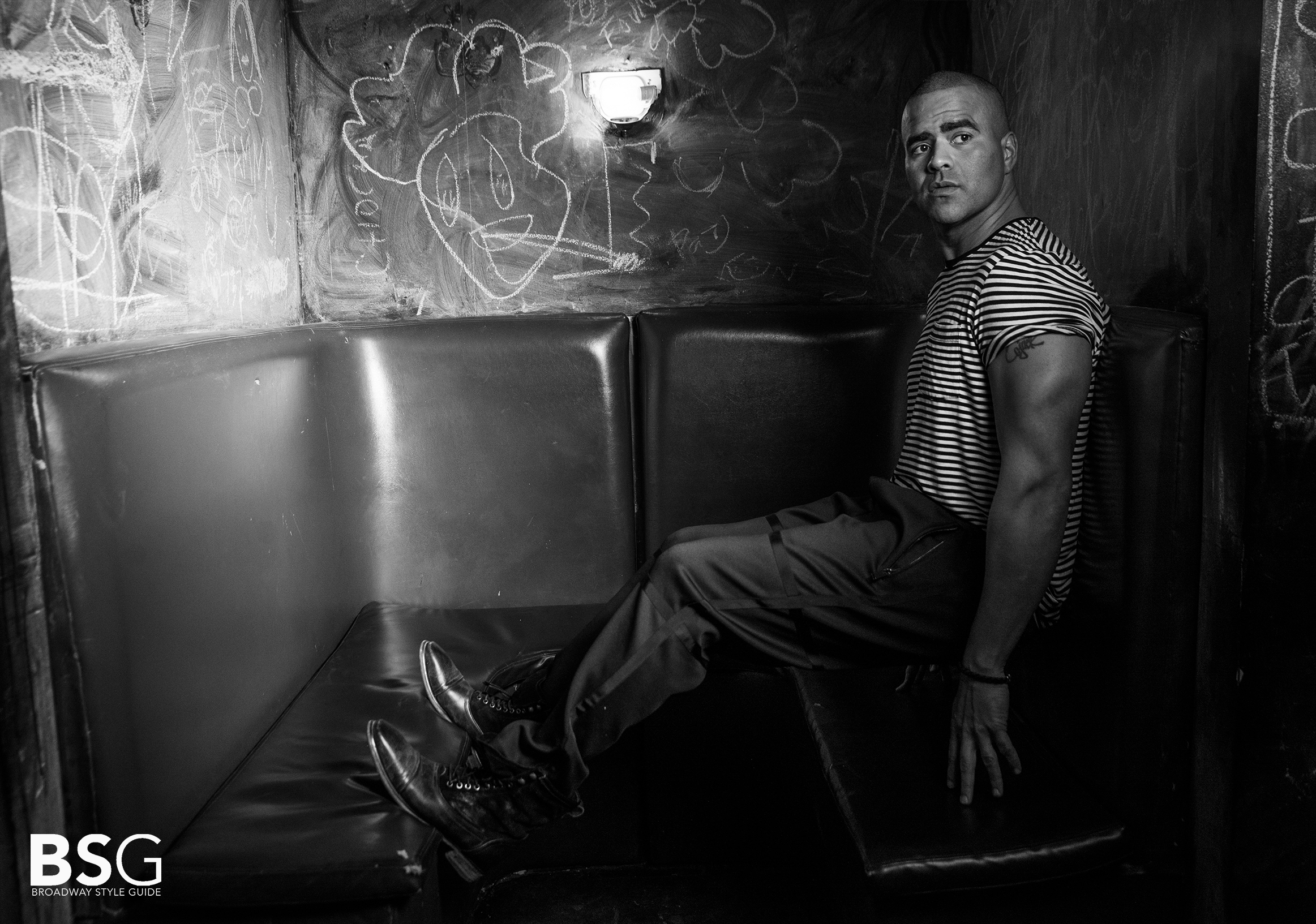 Jackson also keeps his performance fresh by finding ways to relate to his character and establish him beyond the “old guy on the dollar bill.” He notes that Washington was just a few years older than him when he commanded the troops in Boston. “He, like all of the other men of the age, was trying to find his way,” Jackson says. “And that’s something, as an actor, I relate to a lot.”

I hit a few balls in—apparently I’m better at this game than I thought or maybe the distraction is helping. Jackson specifies how he relates to Washington: “I’m always aware of the work that I do and how it affects people,” Jackson says. “I want it to have its maximum effect, which is why I’m grateful to have been part of projects that have heart. And it certainly feels that way with this show.”

And Hamilton has definitely had the “maximum effect.” We’re talking on a Friday afternoon, and on Monday, Jackson will fulfill one of his “bucket list” goals by performing on the Grammys with his cast. “Before I knew what a Tony was, I knew what a Grammy was,” he says.

(Jackson hits another ball in—he continues to deny that he is any good at this game.) And the musical is having an effect outside of the entertainment industry, as well, and during an election year, the show is highlighting some of the conversations this country has been having since its founding.

“We’re still having the same discussions, the same arguments, and the things that moved people back then are moving people now,” Jackson says, highlighting the lyric, “Immigrants, we get the job done,” which always gets a reaction from the audience. “It can be argued that Lin wrote that as a nod to In the Heights because it was all about Usnavi, who’s an immigrant. And you hear the applause that comes every single night. And it’s different. It’s nuanced. The brilliance of the piece is that there’s room for people to interpret in different ways.”

He almost speaks like a politician, and has a presidential-like countenance. When asked about the show’s multicultural casting, he says, “That’s something a 13-year-old from the Bronx is going to relate to, as opposed to the same stogy kind of history that we’ve been taught for centuries. While it is entertainment, the aim of the story is to be able to make it relatable so that some other kid is going to be inspired to write his way or her way out of their circumstance.”

I’m down to one ball and the eight ball before our game is finished. I stall slightly, asking Jackson about his winter style, to which he responds: “My fashion is nonexistent in the wintertime.”

When he’s not working on the show, he enjoys making music, and he’s collaborating with his costar and fellow Freestyle Love Supreme member Daveed Diggs on some right now. “Daveed’s my favorite rapper in the world,” Jackson says. “I don’t fan out with a lot of people but with him, I’m a really big fan of his.”

I take my aim and pocket the eight ball. Jackson isn’t surprised by my victory—maybe he let me win—but I am, as this is not my forte. So I take a winning stance.

“As she raises her arm in victory!” Jackson says.

And I realize I’m doing the Hamilton pose. 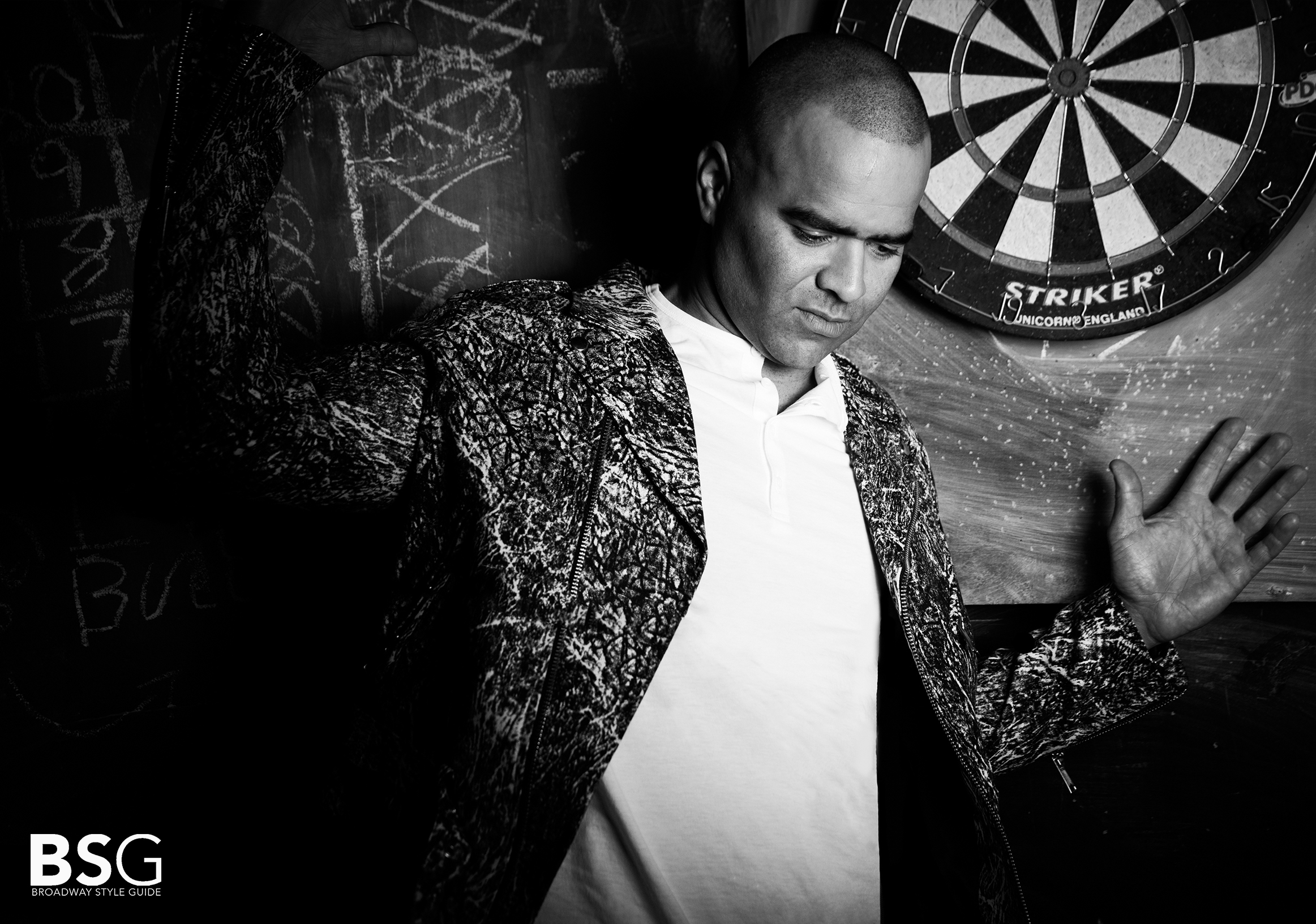