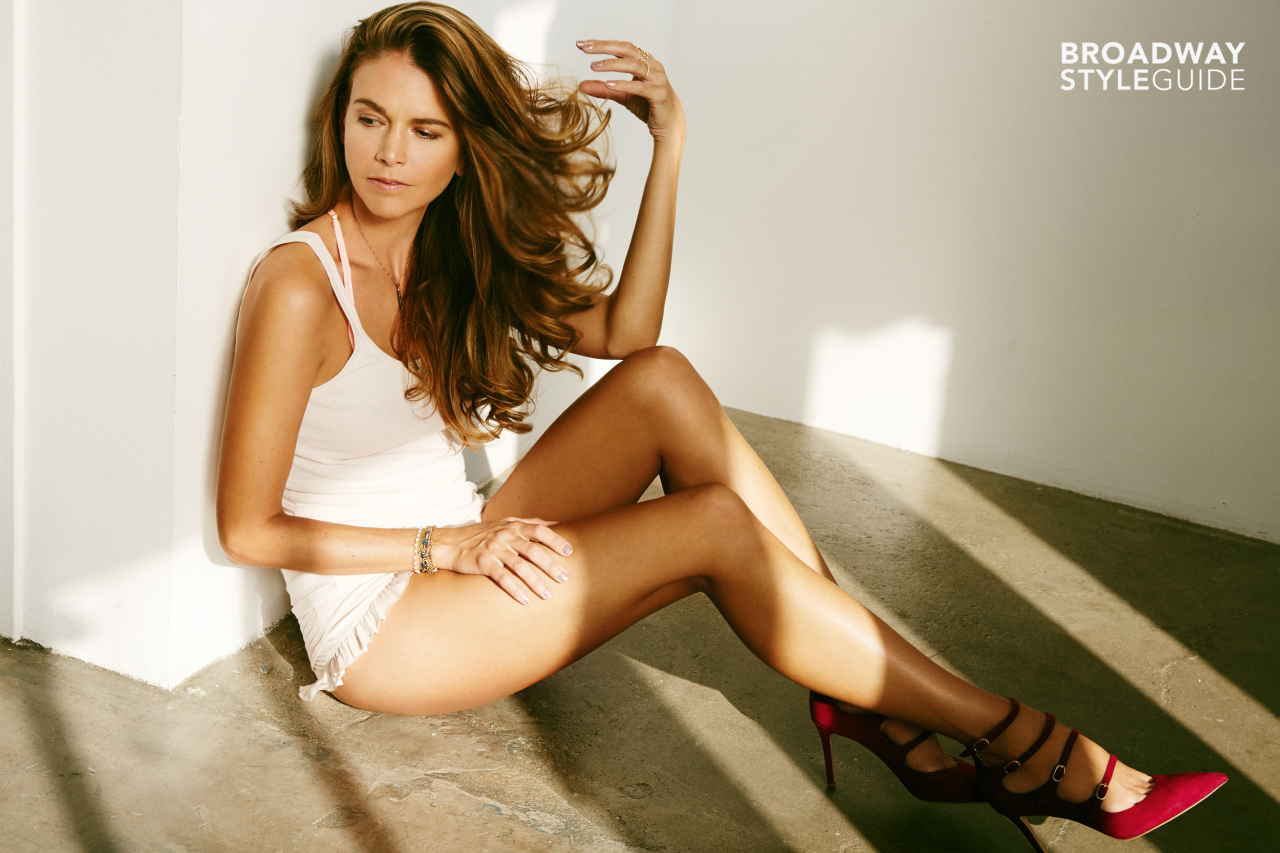 Sutton Foster likes cardigans and pumpkin spice lattes. She’d rather wear UGGs than knee-high boots, and she may have slept in the cotton lilac shirt she’s wearing today. Just add black Nike kicks and cuffed jean shorts and she’s a world away from the high-kicking, razzle dazzle Broadway beacon audiences fell in love with from Tony-winning performances as Millie Dillmount in Thoroughly Modern Millie and Reno Sweeney in Anything Goes.

But she’s not completely sparkle-less today. As she gesticulates, her fingertips let off a little shine. She’s sporting a glitter manicure from a recent promo shoot for Younger, her TV Land series which is currently shooting its second season that will air in January 2016.

“This is a little sad, but I honestly picked it because of Taylor Swift,” Foster admits of her nail polish. “I love Taylor Swift so I follow her on Instagram, and for the VMAs, she posted a picture of her and her posse and they all had glitter nails. I was like, ‘Liza needs glitter nails.’”

Created by Darren Starr (of Sex and the City mega-fame), Younger follows Liza, a 40-year-old divorced mother who pretends to be 26 to get a job in book publishing. However, unlike Liza, Foster has never had to lie about her age to land a part. “It’s funny because I’ve never really thought about age stuff until doing the show and everyone was like, ‘How do you feel about ageism?’ and ‘You’re getting older’ and ‘Parts for women,’ and I was like, ‘Wait, what?’” Foster says. “I’m just sort of grappling with it in a way just like my character.  My career is definitely changing as far as roles I’m playing, but I also feel excited about what’s to come and hopefully I’ll be able to navigate it as I get older. Who knows? I feel like I’m doing some of my best work now than I’ve ever done so I’m excited to see where that could go.”

As Foster speaks, she talks with her hands and rarely makes eye contact. For someone whose job it is to command an audience, she seems surprisingly subdued and shy. But then she lights up her Julia Roberts-level smile and lets out her signature laugh, and it’s impossible to resist her charm.

Foster and Liza share very little in common. While Liza left the workforce at 26 to start a family, Foster spent most of her 20s and 30s singing her heart out on Broadway. But now, after turning 40 in March, which she calls “a huge milestone,” Foster is feeling settled in both her career and her personal life. (She married screenwriter Ted Griffin in October 2014.)

“I feel like I’m exactly where I’m supposed to be so that feels really good,” she says. “Liza and my life are going to be a little reversed. I was so career oriented and I didn’t give up my career for a family or anything—I was like a steam roller of ‘This is what I want.’ Now I’m at a place in my life where I’m ready to have a family and I’m forty so I’m like, ‘Oh shit. How do I fold this in?’ You can’t help but reflect on your life.” 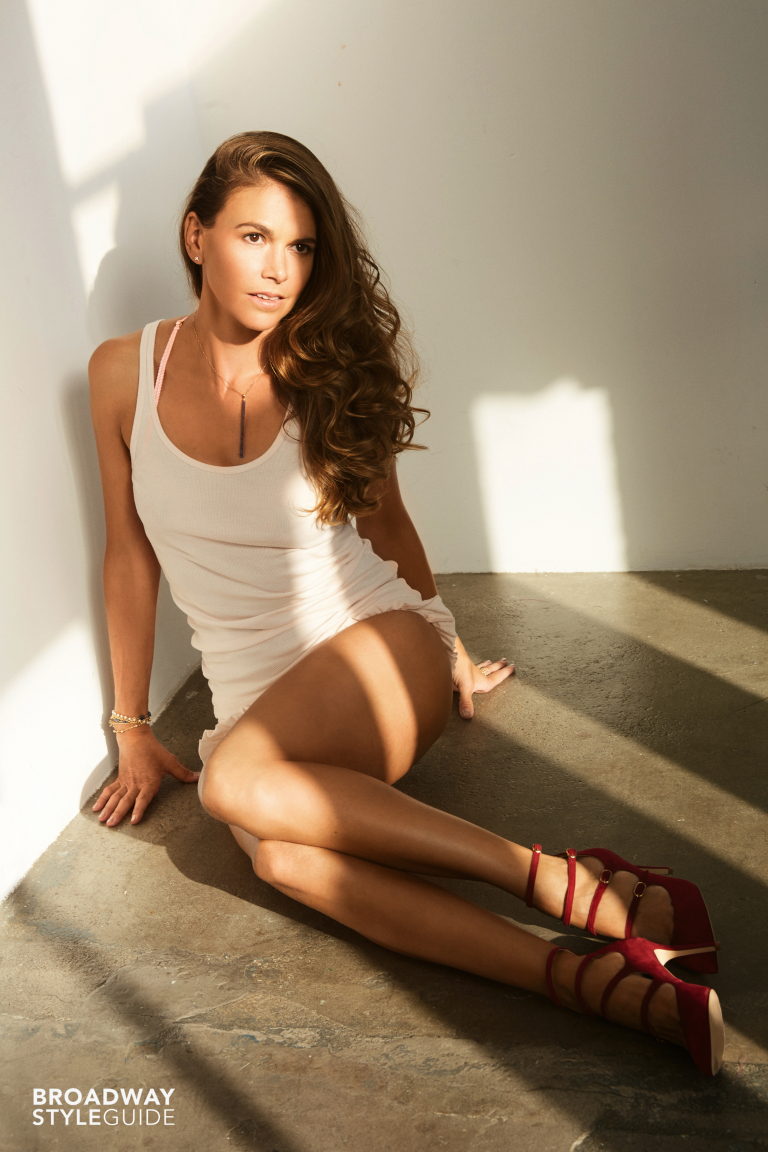 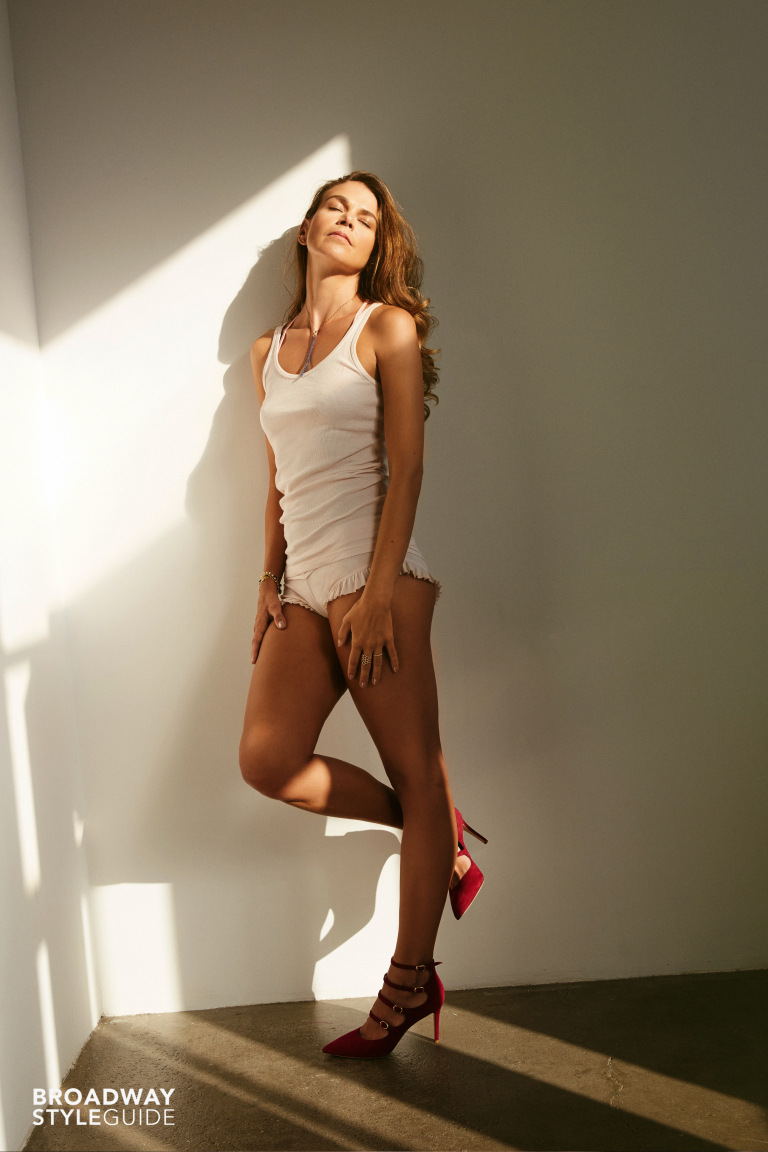 Trying to look 26 has challenges beyond buying more face cream for Foster. Like Sex and the City, which Foster admittedly didn’t watch when it was on but is now getting into, Younger is very fashion-centric, and costume designer Patricia Field created the style world for both series.

“It’s like she’s putting on a costume in a way,” says Foster, who just had a fitting for some of her season two outfits. “I’m already super excited about the stuff I get to wear this season—things that I would never in a million years pick out for myself. It makes me feel like a different person, which is fun.”

The looks on the show are a mix of vintage and everything from H&M to J. Crew to Gucci. “It’s the magic of TV,” she jokes, since Liza likely can’t afford high-end designers. “Last year, I had this crazy Saint Laurent skirt, and I was like, ‘How much is this skirt?!’”

However, Liza’s style sense—or at least that of the show—isn’t rubbing off on Foster, who stands by her kicks and her cardigans. (“I’m a pretty basic gal,” she adds. “I don’t think about fashion on a day-to-day basis. I think of comfort.”)

She does wear one item on the show that is her own: a necklace with an “L” on it. Amy Sherman-Palladino, who created Foster’s first TV show Bunheads, gave her the piece to commemorate the passing of Foster’s dog, Linus, and since “L” is also for Liza, Foster wears it as her character on Younger.

She also started working with a stylist for Younger promotional events, which she’s enjoyed and has helped her figure out what kind of clothes she’s attracted to. She’d rather be simple and sophisticated than make a fashion statement—but she also doesn’t want to make a statement on accident. “If I’m left to my devices, it’s not gonna be pretty,” she says. “So I think they just wised up and realized, ‘Let’s hire someone so she doesn’t show up in a sack.’”

Luckily, thanks to the premise of the show, Liza is probably just as confused by the clothes as Foster.

“It’s interesting to play in that world, even though it feels a little foreign to me; it doesn’t come easily,” Foster explains. “I like to shop and I like clothes, but I really go for a lot of neutrals. Being a dancer and wearing costumes and doing that for a living—and even wearing makeup for a living, I don’t like to put on makeup. It feels like work, and I don’t want it to feel like work. I want it to feel as easy and stress-free as possible. I think that’s one of the reasons why I wanted to be in underwear [for this photoshoot]. I was like, ‘Underwear is perfect because I just don’t want to deal with clothes.’”

And Foster doesn’t need any embellishment to look good. At the moment, she also has an incredible tan, which she earned from spending two weeks in Puerto Rico with her husband while he shot the upcoming Amazon Prime series Mad Dogs. Her vacation wasn’t all play and no work though—Foster nabbed a guest starring spot in the show while she was there.

She’s a big fan of “the left turn” she says and doing roles that might surprise audiences. While she time-stepped onto the scene in flashy, showgirl type roles in Thoroughly Modern Millie, The Drowsy Chaperone, Young Frankenstein, and Shrek: The Musical, her recent roles have required far less tap dancing. She earned a Tony nomination for her title turn in Violet, an intimate musical about a woman with a scar across her face on a journey of self-discovery, and recently starred in The Wild Party as Queenie, a 1920s era party girl, in the New York City Center Encores! Off-Center series, which revives forgotten Off-Broadway musicals in concert stagings, over the summer.

“I want to challenge myself as a performer and as an actor—that’s what it’s all about for me,” she says. “Do I love tap dancing and belting and sequin costumes? Yes, of course I do. But it’s also really fun to do something that stretches me in a different way. It’s exciting. And terrifying.”

And there are still challenges she hasn’t tackled yet. She’d love to try her hand at Shakespeare, and wants to do a movie musical. And since Younger only shoots three months out of the year, she has time to pursue other avenues. “I don’t think that it has to be one or the other,” Foster says about the balance between TV and theater. “I love doing TV, don’t get me wrong. It’s really fun and a great change of pace, but my heart will always be in the theater. I never pursued anything else but theater. These are two TV projects that came along—I wasn’t actively pursuing them. But I feel so thrilled that I’m really known as a Broadway performer.”

But she’s garnering a whole new fanbase from Younger that doesn’t know about her Broadway profile. “It is interesting now being on television,” she explains. “I posted something on Instagram promoting my New York Pops concert and Younger fans were like ‘You sing? I didn’t know you sang!’ And I was like, ‘I do. I do sing.’”

She assures fans that Liza will never sing on Younger—“It would be weird”—even though her character on Bunheads did. However, on the show she played a former Broadway performer teaching dance in a small town so it made a little more sense. Creator Sherman-Palladino, of Gilmore Girls fame, was also one of the lead producers of Violet on Broadway, and Foster and her have forged a strong friendship and working relationship, one that Foster shares with many strong creative women like Leigh Silverman, Jeanine Tesori, Kathleen Marshall, and Susan Stroman. She’s loyal to her ladies—just like Taylor Swift.

“Those are like my bitches. They’re like my posse. That’s my crew. I would follow them to the ends of the earth,” Foster says. “They are who I want to be. They’re my idols. I just respect them so much as artists and visionaries and so I like being around them because they’re just awesome.”

Miriam Shor is another lady who Foster has worked with a lot recently. Shor stars as Liza’s Miranda Priestly-esque boss on Younger, and she also co-starred with Foster in The Wild Party. The two originally met because Shor was friends with Foster’s brother, Hunter, from college. “Basically she was a wunderkind,” Shor recalls of meeting Foster. “Kicking ass and taking names on the American stage while we were still emoting in Acting 101.”

Foster still maintains that youthful energy—even on set for Younger. “Anyone who works with Sutton will eventually see her do her patented weird little dance move—it’s goofy, it’s hilarious, it’s the perfect tension breaker on a hard day at work.  Makes me laugh every time,” Shor adds. 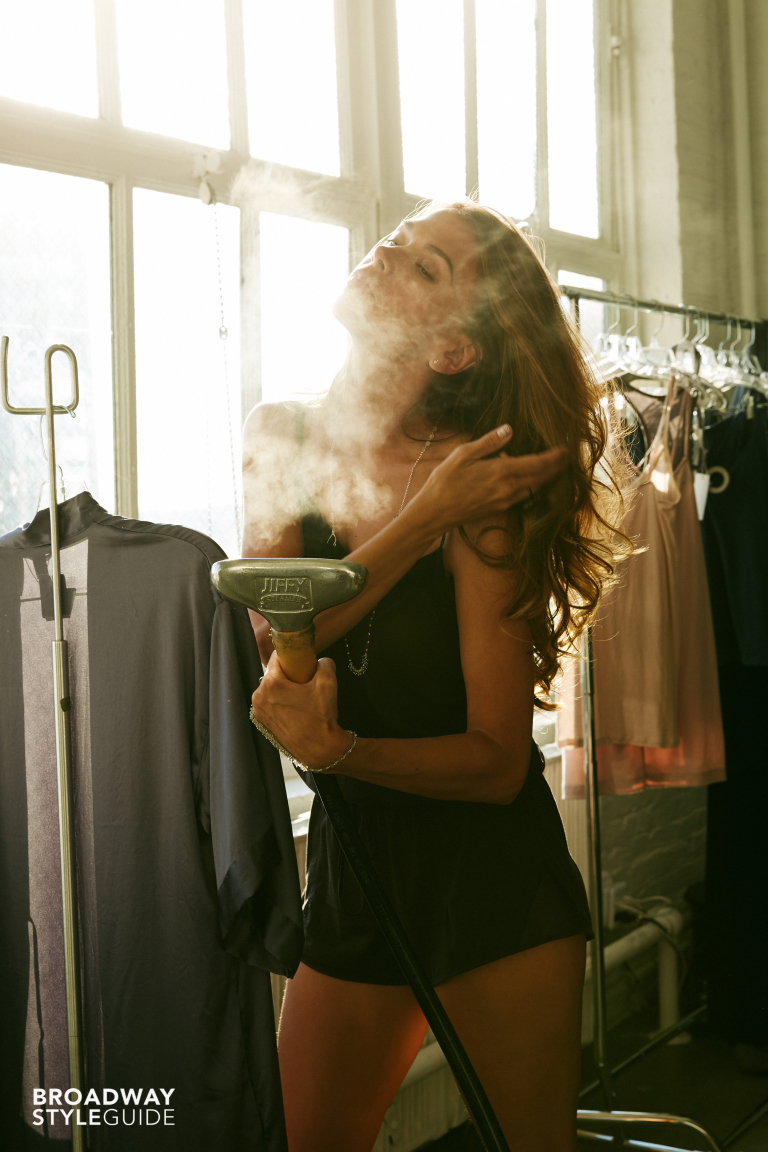 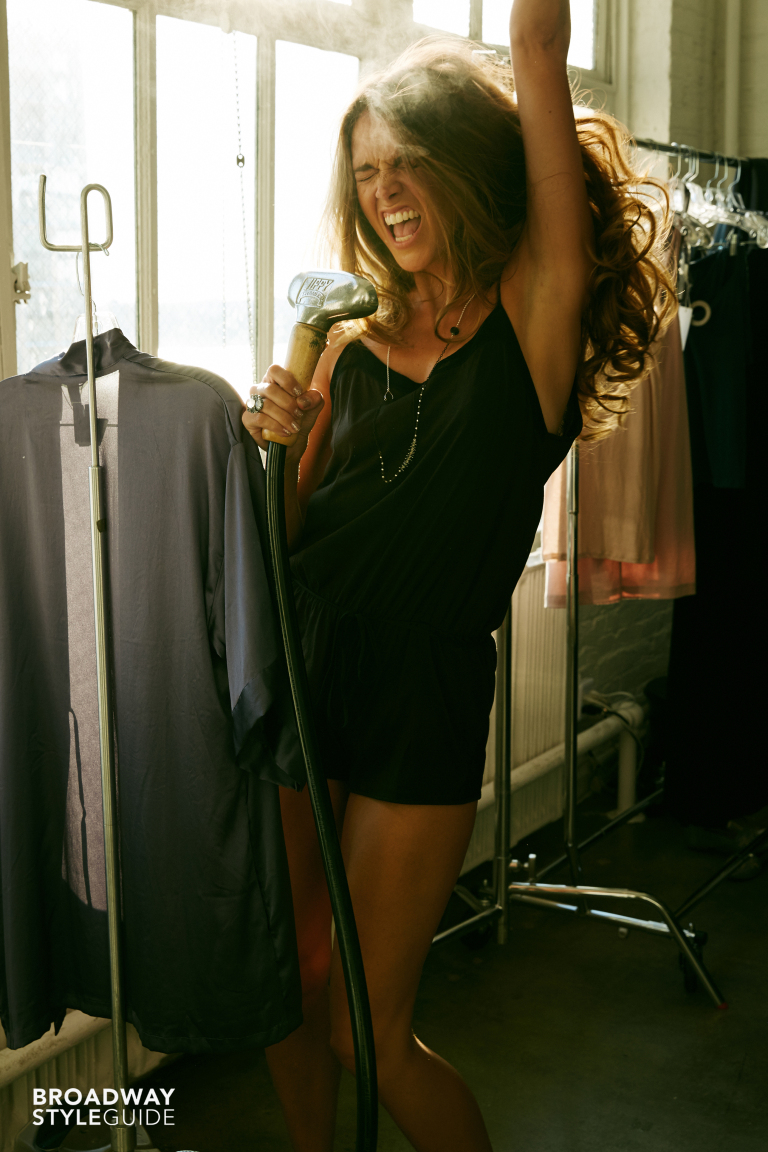 Foster struggles with her position as a “role model” in the Broadway community, and cringes slightly at the mention of the term. “It’s hard for me to grasp because I don’t have that perception of myself,” she says. However, she also remembers being that kid idolizing Broadway performers.

“I used to be that fifteen-year-old girl who looked up to Patti LuPone and Liz Callaway and Lea Salonga,” she explains. “So I do feel a responsibility to say, ‘Hey look, you can be like a totally normal person.’ And I’m a massively flawed human being who is just trying to figure it all out, but I work really hard and I try to constantly challenge myself and I try to be kind to people I work with. I didn’t compromise who I was to get where I’m at, and so I think that’s really important to be able to show young people.”

Foster just has a few more days before she’s back to shooting Younger, but tonight she won’t be thinking about work: She’s going to the Madonna concert at Madison Square Garden. But first she has to go home and walk her dog Mabel.

“I gotta go to Madonna guys!” she says, but leaves enough time to snap a picture with the team. “If there’s anything else, let me know. I know I love talking about fashion.”

And then she laughs. 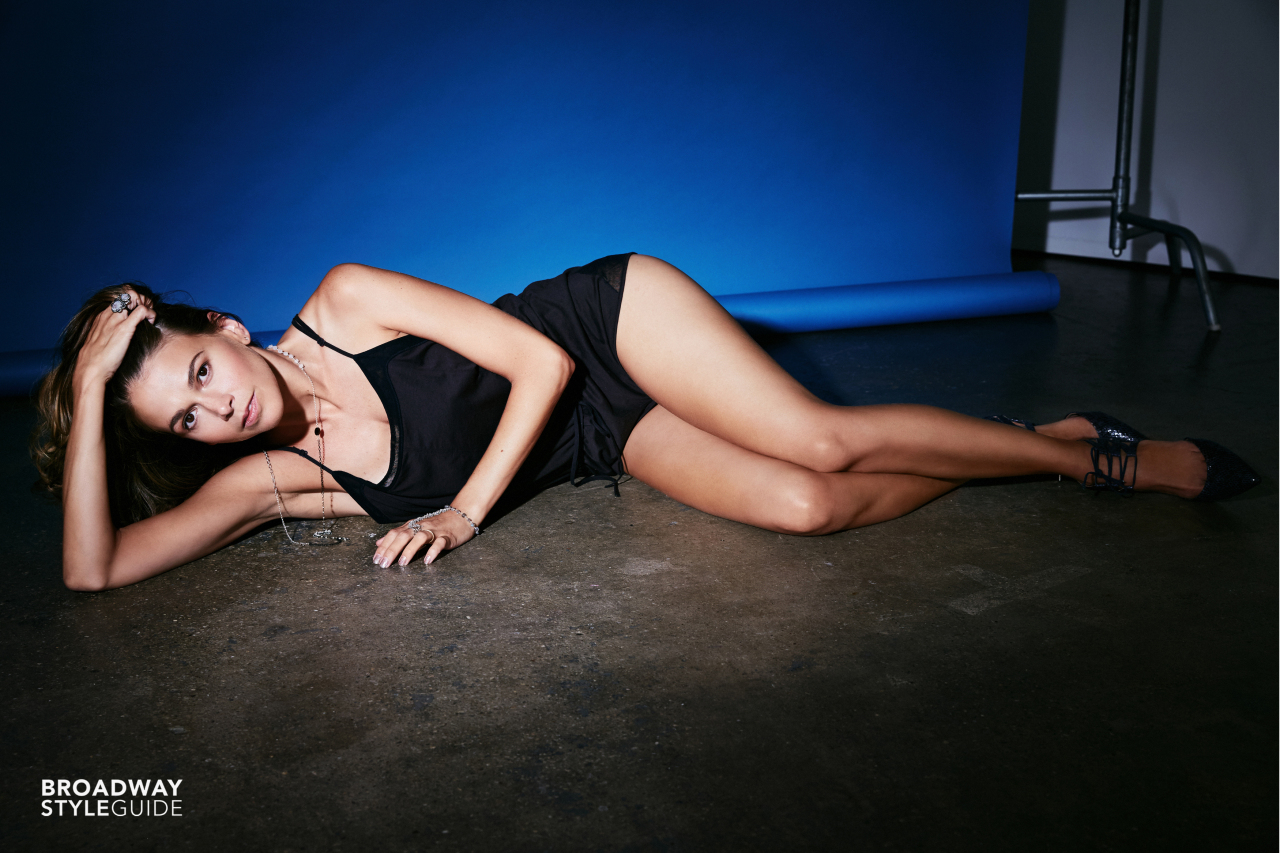