At this time last year, Katie Rose Clarke was working retail at Club Monaco. “Thank you Lord for Allegiance!” says Clarke, who stars in the musical about Japanese internment camps during World War II. The show opens on Broadway on November 8. “You never know what ups and downs you’ll be met with in this industry.”

Clarke is deep in rehearsals and previews for Allegiance, and though she admits that her daily wardrobe, at the moment, consists of baggy jeans, Vans, and a T-shirt, she loves getting to show off the show’s style onstage. “The show is set during World War II, and I love that era for fashion,” says Clarke, who plays a nurse who falls in love with one of the prisoners in the internment camp. “Even the uniforms I wear as a military nurse are super feminine.”

Although Clarke admits she’s a sucker for a great bargain—she loves H&M, Target, and Old Navy—Broadway Style Guide gave her a little break from her sneakers and jeans and played dress-up with cocktail attire. 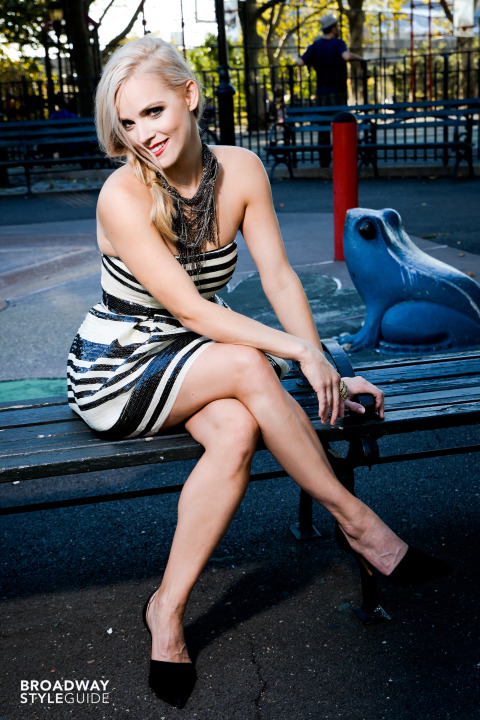 Date Night
“Right now, my husband and I have opposite schedules (he works in finance) so we set aside Friday nights to meet during my dinner break after his work day to squeeze in a dinner date,” says Clarke. “To keep it feeling special, I always try to put on a little makeup and step up my look a little. My go-to outfit would be a dress and booties. It’s simple and comfortable, but also pulled together. A New Yorker’s tip: If I ever want to wear a little heel (which is rare), I bring along a pair of flats and change really quick before my date. It makes commuting so much easier.” 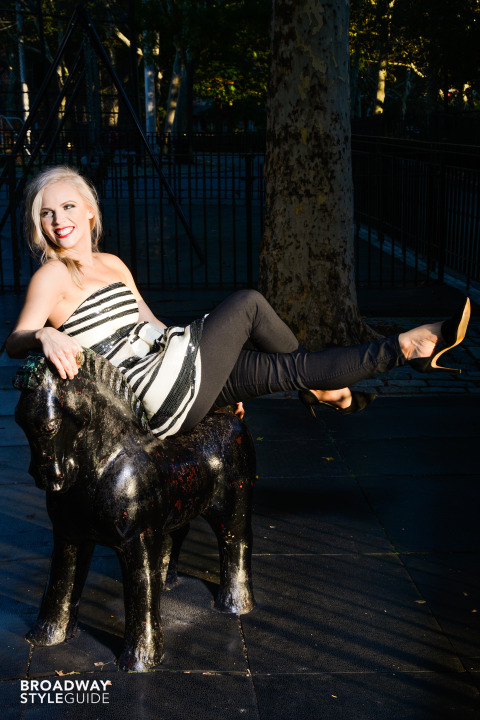 Dressed-Down
One of Clarke’s favorite evening looks is a jumpsuit. Thanks to her tenure (and her employee discount) at Club Monaco, she has a good stable of options. “It’s fun to play with accessories to dress it up or down, adding tights and booties to the shorts for fall, statement jewelry for a cocktail/party look.” By pairing pants with a cocktail dress, this look is a fun spin on a jumpsuit. 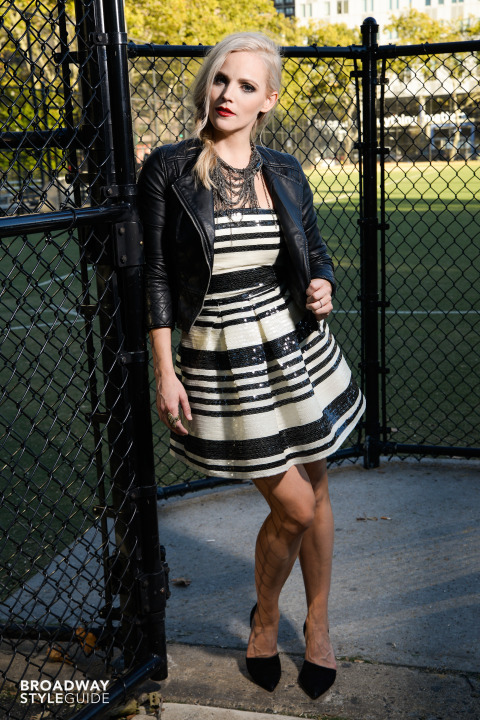 On the Town
Clarke says the look with the jacket and accessories is the most “her.” “The accessories bring a fun edge to the dress, which I think is sexy and I love leather jackets. I would wear it to the theatre or a holiday party. I’m still a fan of dressing up to go to a show—the modern audience doesn’t really dress up for the theater anymore, which I understand.  But going to Broadway show is so special (and not cheap) so I like to dress for it and make it a special event.”