On a late summer afternoon, just before Labor Day weekend, it seems as though the entirety of Manhattan is attempting to squeeze into the Lincoln Tunnel to escape the city for one last hurrah before bidding the season farewell. Forty-five minutes later, we pull into a picturesque suburban driveway, and the juxtaposition is confounding. This leafy New Jersey neighborhood—far away from the marquees of Times Square—is home to Broadway leading man Aaron Lazar and his wife, model LeAnn Lazar. 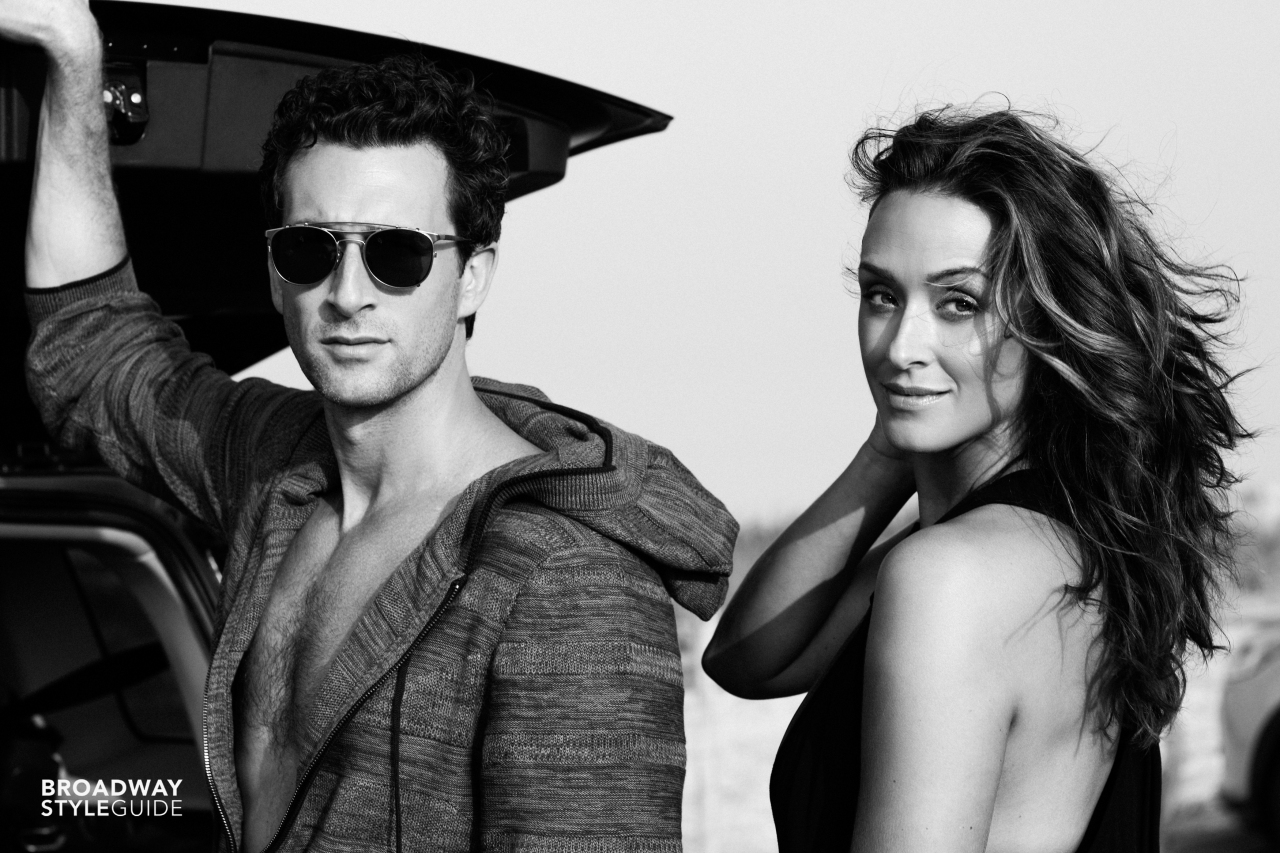 In addition to numerous film and television roles, Aaron’s break-out performance was as Fabrizio in The Light in the Piazza (replacing Matthew Morrison), which was filmed for PBS. He went on to star in The Last Ship, Mamma Mia, A Little Night Music, Les Misérables, and many others. LeAnn began her modeling career as a teenager and has been signed with both Ford Models and Elite Models NY. During the course of her career, she has worked with designers ranging from Badgley Mischka to Diane von Furstenberg and major brands, such as Madewell and Reebok.

As we get out of the car, Aaron comes bounding out of house to greet us and professes excitement about our impending photoshoot—but also a little hesitation. After seeing the clothing pulls from the shoot, he remarks that they might be the “tightest and shortest swimsuits I’ve ever worn.”

He leads us into the entryway, where LeAnn meets us. She has graciously prepared “craft services” for the group (a deli lunch). The plan is to do a quick fitting and hair and makeup before heading out to Sandy Hook, New Jersey, just outside the mouth of New York harbor, to shoot in the soft early evening light.

As we sit around the table, we start to talk about how the couple met and what they love about each other. They don’t need much encouraging when I tell them to be as informal and loving as they would be over a typical family dinner.

Aaron: Great, we love talking about ourselves…
LeAnn: …and we also love cutting each other off.

Perfect, you will be naturals. So how did you two first meet?
Aaron: I met LeAnn through one of my best friends at Duke. LeAnn had just moved to the city and was in a girl’s apartment in midtown, actually with two other friends from Duke that my best friend knew. He was like, “Bro, my friends have this new roommate, and she’s this smokin’ hot Ford model. You should totally come over there with me and introduce yourself.” You know what, LeAnn loves telling this part of the story. I’m gonna let her pick it up right there.
LeAnn: [Laughs] I had just come back from a photoshoot and showered—my face was kind of red and I was in sweatpants. And my roommate said, “Oh, Courtney and Aaron are coming over,” and I thought it was two girls so I didn’t care. I opened the door and there were two guys standing there.
Aaron: She played the “real girl” card, and I fell for it hard. I was smitten. I finally called her and asked her out, and she was like, “I’m so sorry, I’m actually headed home to North Carolina for the weekend, but when I get back, I’ll call you and we’ll grab some dinner.” I remember saying to my buddy, “There is no way this girl is calling me. She’s totally letting me down easy.” And then her flight ended up getting cancelled, and she called me from the airport and said, “You know what, I’m headed back to the city if you want to have dinner tonight.” I was like, “Wabam!!” And that was the first of many model stereotypes that LeAnn shattered.
LeAnn: That’s how we met and then it kind of spiraled into this really cool, sort of courting thing. Aaron had just joined the company of Phantom of the Opera when we started dating and within the first four to five weeks he happened to go one for Raoul.
Aaron: Phantom was my Broadway debut.
LeAnn: I thought I was going to meet Aaron’s parents for dinner before the show, and when we go inside the restaurant, it is basically the entire town of Cherry Hill, New Jersey that his parents had bussed in to see his debut on Broadway. I walked into a sea of t-shirts with Aaron’s headshot on them, and I was like, “Okay, so this is what I’m stepping into.” But I literally fell in love with him as he was performing as this romantic action hero on stage that night. It was amazing.

Speaking of careers, you both have both maintained high-pressure careers and balanced them with your relationship. How have you made that work over the years?
Aaron: We are both super passionate about our careers but communication is key, and we are both really good about being there for each other when the other person is in need. LeAnn was really cookin’ as a model, and then we started having a family and we had this big conversation about “How is this going to work? Who’s going to run the family and the household?” LeAnn said, “All right, I’ll take a step back from my career so I can run the house, and I can raise these kids.” She was just so selfless about it. She has this quality where she is able to put other people before herself. LeAnn is the rock—the world’s greatest wife and mother. And now that the boys are a little older, she has just gotten back into the swing of things with her career, and she has taken off again. It’s a beautiful thing to watch.
LeAnn: The great thing about Aaron and about us together is that at the core, we put each other first. Often in the entertainment business, there are a lot of egos in the way, and people want to continue with what they’re doing but you really have to commit to each other and communicate. And really, we’ve grown a lot stronger as a couple and our careers have grown even further since being together. And then you throw kids in the mix and life and family, and it’s stronger—but also more hectic.

If you could go back to when you first started dating and give yourself relationship advice, what would you say?
Aaron: I would say, balance things out a bit more. LeAnn is better at balance than I am. I would tell myself to embrace more of a balance and not let the scales get tipped toward work all the time.
LeAnn: I actually think, surprisingly, we had a pretty strong relationship early on, but I think that if I was to give myself advice, it would be to be a little less reactive. [Laughs] And probably a little less selfish.
Aaron: I just said you’re the most selfless person in the world.
LeAnn: Well I am now. But I think I was a little more selfish.
Aaron: Well when we were dating, we were both consumed. She was really modeling, and I was doing the acting thing. We were totally self-involved—honestly kind of narcissistic and all of those things. We were trying to figure out how to make time for each other. Once we did that…
LeAnn: [Interrupting] Oh, I have to tell this story. So, Aaron was one of the most unorganized people when it came to appointments and time. He still has an issue with time management—it’s a little hard for him. But I remember we were going to meet for lunch—I was in between a couple of jobs—and he was running around to auditions. He was in a show at night so he only had so much time in the day, and he cancelled on me at the last minute a few times. We finally met up, and I said to him, “Look, you’re not the most important person in the room. I have a career as well and a life, and if you’re going to continue to break plans with me, then you’re just going to have to date somebody else because I’m not going to hang around for that.”
Aaron: I was like, “Whoa, she laid down the law!” Actually she has laid down the law for our entire relationship, and uh, it’s just easier that way. I advise all men out there interested in strong women to let the women lay down the law.
[LeAnn laughs]

Since this is a swimwear feature, I have to ask, how do the two of you stay in such great shape?
LeAnn: I think eating is a lot of it. Since we met, our eating habits have been very clean and very organic. It’s a lifestyle. It’s not, “I can’t eat this or I’m only eating salad.” I’m actually a really good cook, and I use a lot of alternative foods and alternative grains which really keeps us balanced. We’re not crash dieters, and we don’t really eliminate a lot of stuff. It’s about organic and balance.
Aaron: The reality is we are both in these fields where image is important so we’ve had to create this lifestyle and part of it is food and part of it is working out. We push each other at the gym.
LeAnn: We both do TRX.
Aaron: And CrossFit. LeAnn also started using a skincare line called Rodan + Fields a couple of years ago, and she was so impressed with how fast she was getting results that she signed on as a consultant. You have to take care of your skin. At first, part of me was like, “I don’t want to deal with it. I’m a dude.” I like to walk out of a shower, put clothes on wet, and head out the door. I was totally resistant, but then of course I started using this skincare line. I don’t know about my skin but I can brag about my wife, who is well into her 30s but looks like she’s 25. Oh, I should hype up her website too.
LeAnn: It’s secondglance.myrandf.com. I have a lot of models and actors who now use it. So yeah, skin care and healthy lifestyle are definitely what keep it going. And abs every morning.

Abs every morning? What does that mean? That makes me nervous.
Aaron: Not me, dude. Well, unless I have a swim photoshoot that day.
LeAnn: Oh please, you totally do abs. 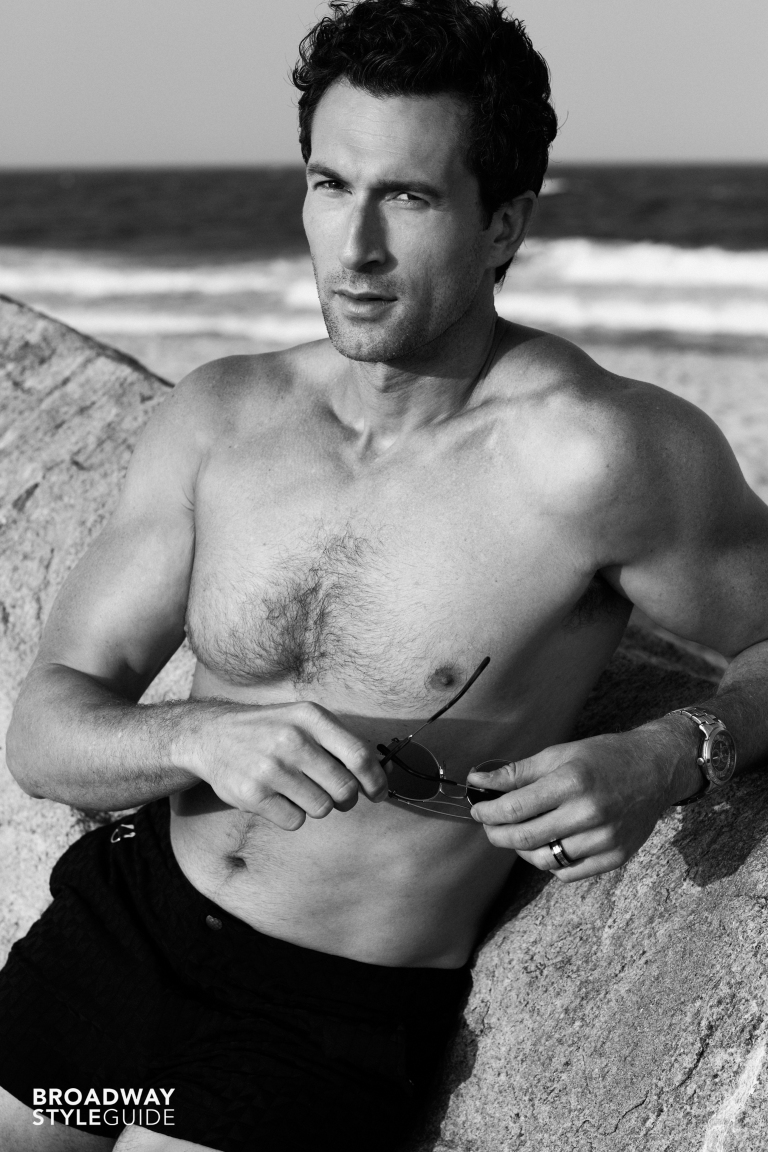 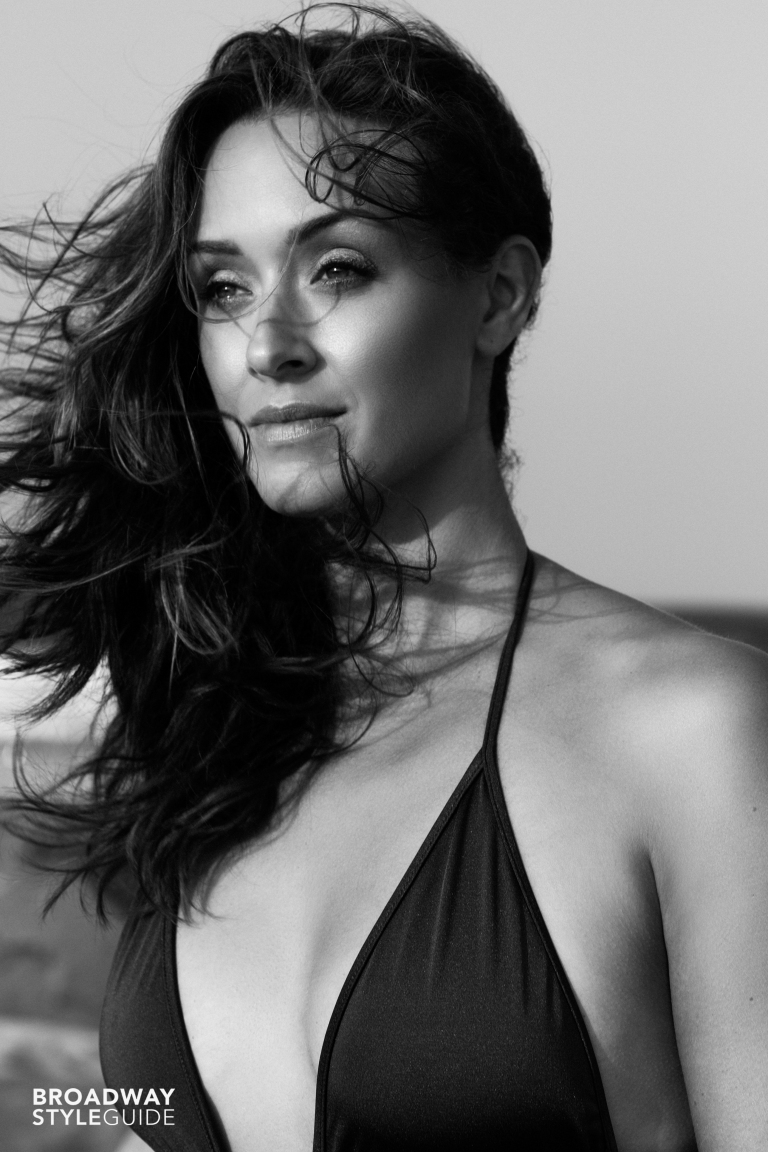 After we wrap the shoot, we decide to grab dinner. Over a crab feast, Aaron and LeAnn agree to a rapid-fire round of questions.

Suntan lotion or spray?
Aaron: Spray
LeAnn: Spray. By the way, it’s not fun if we both give the same answers to everything.

Poolside snack of choice?
LeAnn: Margarita
Aaron: Anything with alcohol

Three things you MUST have when near the water?
Aaron: Camera, sunglasses, swimsuit
LeAnn: A thong, cover-up for walking around, margarita

What’s your guilty pleasure song of the summer?
LeAnn: That one about feeling my face.
Aaron: The one about a cheerleader by Omi.

LeAnn, what is Aaron’s favorite piece of clothing this summer?
LeAnn: A black, v-neck t-shirt

Aaron, what is LeAnn’s favorite piece of clothing this summer?
Aaron: Her thong—she’s been tanning those cheeks!