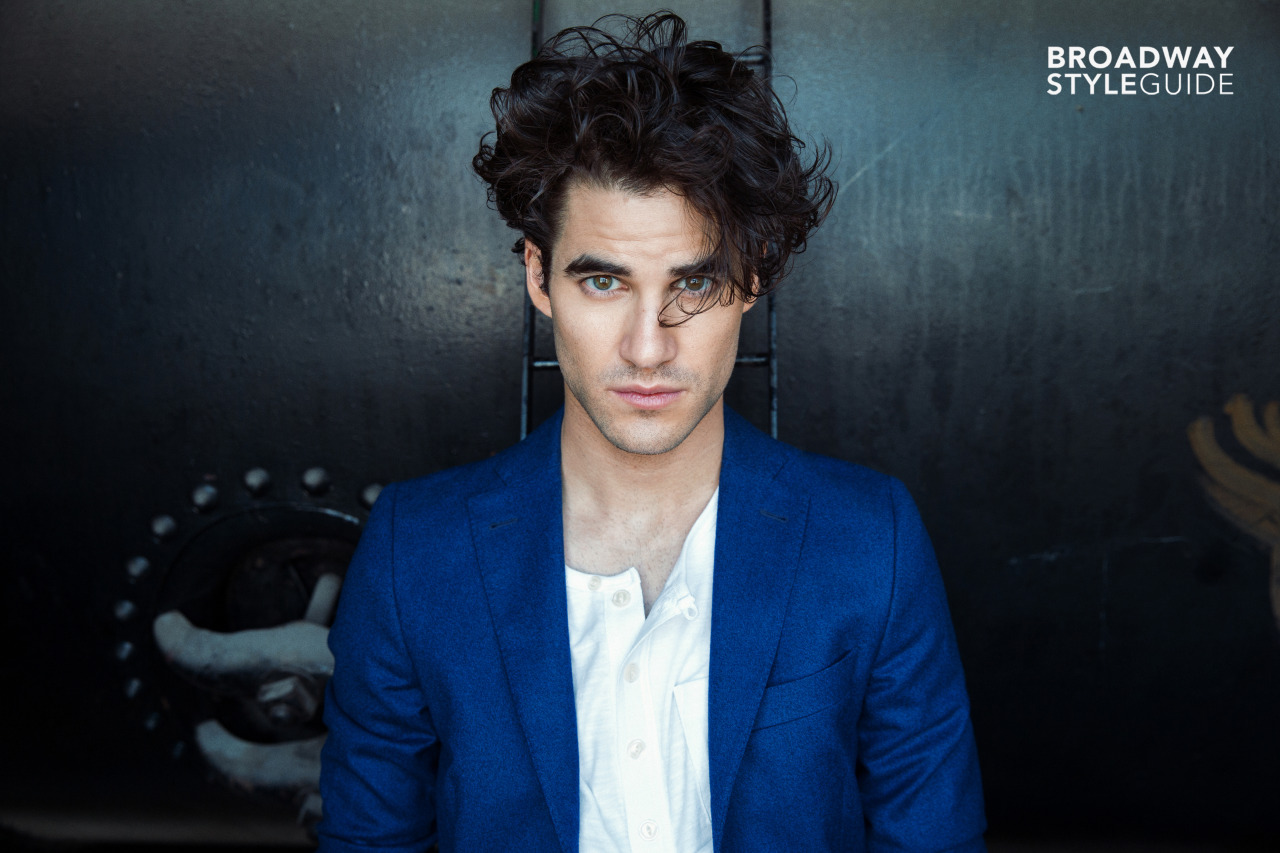 The star was one of the “items” auctioned off at the St. James Theatre on Monday, June 29 at the Voices for the Voiceless concert, and after an intense bidding war, two lucky (and loaded) audience members paid $15,000 each for the chance to be serenaded by the star. The proceeds went to You Gotta Believe, a nonprofit dedicated to finding permanent homes for foster children over the age of 10.

The winners? A 7-year-old girl and a middle-aged woman — a veritable cross-section of Criss’s largely female fanbase. He sang “Close to You,” and as a bonus, he played the piano and performed the song that catapulted him to household name status on Glee, “Teenage Dream.”

“This is a little inappropriate!” Criss said from the stage, editorializing the lyrics for his young subject. “Maybe in 20 years!”

The next day at Drift Studios, he’s still thinking about the performance. When I casually suggest that I should pay up for our sit-down interview, he almost violently dismisses the idea. “No, you shouldn’t!” he says, seemingly embarrassed by the thought.

He’s feeling “genuinely bummed out” because he doesn’t think he split the time evenly between the two winners. “I thought the other woman was the girl’s mother or something!” he confesses. “So if she’s reading this, I’m really, really sorry. I wish I had given you more attention and hung out afterward.”

That’s just the kind of star Criss is — humble, honest, and genuinely interested in the people who support him. He’s approachable and surprisingly soft-spoken in person, though he does talk passionately about his work. He takes a lot of care with his fans, many of whom have flown from all over the world to see him headline Hedwig and the Angry Inch at the Belasco Theatre. His 12-week run ends July 19.

“I see the U.N outside every night!” he says of the reams of people who gather at the stage door. “People are like, ‘Darren! Darren! Please take a photo. I came over from New Zealand!’ And I’m like, ‘Wow! That’s so cool!’ And then the next person is from like Mars, and I go, ‘Oh my god!’”

Criss understands the “social phenomenon” of being starstruck, as he’s felt it many times. (To all the fans who inquire whether he got their gifts: Yes, he got them.) He still remembers a special moment he shared with Young Nala from The Lion King at the stage door when he was 10, and he has waited for Eddie Izzard outside several shows. In fact, fandom is what drew him to Hedwig.

Criss is an admitted “Hed-head” and has been obsessed with the show since high school. He texted composer Stephen Trask and book writer John Cameron Mitchell, the star of the original downtown production and film who did a stint on Broadway just before Criss, as soon as he knew his wrap date on Glee.“[Hedwig] was the first thing that I wanted to do,” he adds. “It truly would’ve driven me mad to see anyone else get to do it.”

The show marks Criss’s second Broadway outing after he spent three weeks as J. Pierrepont Finch in How to Succeed in Business Without Really Trying in 2012. “I never thought I would do a Broadway musical; I’ve done more straight plays in my life,” he says — a surprising admission for someone who gained fame from Glee and StarKid, a theater company he co-created that builds viral musicals for YouTube. “I don’t think I would’ve taken over for anybody for any other show but Hedwig because I would’ve liked to come back and done my own thing,” he continues. “But Hedwig is so wildly a part of my cultural upbringing that I couldn’t say no to it. I didn’t even have a chance to say no. It was always yes.”

And right now is a particularly momentous time to be playing the transgender East German rocker. Criss is still reeling from the performance on Sunday, June 28, when audience members flooded in from New York City’s Pride celebration in the wake of the landmark Supreme Court ruling on marriage equality. During the show’s finale, Hedwig and her husband Yitzhak, played by Rebecca Naomi Jones, command the crowd to “lift up your hands,” and people raised rainbow flags and basked in the show’s message of love and individuality.

“That’s something I will never forget. I really lost it that night,” Criss says. “This whole weekend has been really, really fabulous. I’m so thrilled to be alive and involved with something like Hedwig in lieu of this momentous occasion in our history. It’s one of my greatest joys.”

Criss’s older brother, Chuck, introduced him to the musical, and the pair would watch the 2001 film on repeat in their San Francisco basement. The significance of introducing the story and the music to new audiences now is not lost on him. “We take for granted the things that we know as cultural icons, but there will come a time in every person’s life when they will hear like a Beatles song for the first time,” says Criss. “So, for me, I go, ‘Of course everyone knows Hedwig.’ But not everybody does, and I feel that it’s an honor to pass on the joy and the inspiration and the fun that I had ingesting its magic.”

Offstage, Criss couldn’t look more different from his onstage female alter-ego, though he does keep one remnant of her: blue glitter nails that he has to reapply every few days. He’s relaxing on a tufted, grey couch at Drift, after his photo shoot has wrapped, wearing a navy cotton tee and forest green pants.

“I love fashion but in a very modest way,” he says, adding that he likes to keep things simple every day. “I would never pick me off the street and say, ‘Hey you should be involved with fashion!’… I definitely think there are enough photos of me looking like an idiot walking around New York City.”

However, he does like to have a pop of adventure in his outfits. “I don’t see why anybody would miss out on a chance to do something a little fun, like wear socks that are cool.”

Case in point: he’s sporting yellow socks with the red Ninja Turtle Rafael on them. When asked if he’s a fan of the Turtles, he responds, “I’m a breathing human being!…When you have the opportunity to be creative and express yourself in some way without shoving it down someone’s throat, why not do it?”

One of Criss’s most famous fashion items is his pink Ray-Bans, which he’s famously worn on several red carpets and at concerts. (Do a quick Google search for proof.) At the suggestion that he started the trend, he denies the idea, gently sighs, and explains the origin of the glasses. “I was in Los Angeles for the first time as an adult, by myself, and I was in a mall and it was really sunny and I couldn’t see because I have really sensitive eyes,” he says. “And I went to a kiosk and the first sunglasses I saw, I was like, ‘Oh sweet pink! Those are fun!’ So I got those, and I just wore those around and they just took on a life of their own.”

In an episode of Glee, Criss, as Blaine, “unconsciously” picked up a pair of pink sunglasses that were laying around a Gap, as he wanted to give a little nod to fans who knew him before the series. “Glee had a habit of trying to make the characters the actors as much as humanly possible, which I was very staunchly opposed to,” he explains, adding that the sunglasses are a “me thing.”

Criss laments the fact that actors become associated with their last character. When he played prep school acapella star Blaine, people told him “It’s cool to see you doing something different than the surfer bro, best friend guy.” And now that he’s playing Hedwig, people constantly say it’s great to see him doing something new.

“That’s the funny thing about actors,” Criss says. “We act like different things so people get what you did last stuck in their brains.”

Criss also likes to change it up on the red carpet, though he’s hesitant to name specific designers he likes because he doesn’t want to get in trouble with his stylist, Ashley Weston, who he gushes about. The two met through friends, and Criss has been working with her since he started out. Her career has exploded alongside his, though Criss refuses to take any of the credit.

“It’s always a fun collaboration because there are things that I clearly like, and nowadays, when I don’t have time to do things, she knows what I want,” he says. “I’m not just willfully sitting there saying, ‘Dress me!’ I’m very hyper-specific about anything that I put on my body.”

He’s specific about everything from his pant hem’s relation to his shoe to the type of lapel and collar on his jacket. Weston usually gathers three choices for an event, though Criss admits she always knows which one he’ll choose.

When asked “what’s next,” Criss is careful about what to say. He wrote the song “This Time,” which was the final song Lea Michele’s character Rachel Berry sang on the Glee series finale, and there is a lot of Emmy buzz about the tune. “I feel like even saying it jinxes it!” he says. “To feel like that needs to happen would have such a absurd sense of entitlement that I would have to beat myself up.”

He has no official plans post-July 19. “Hopefully somebody sees me in Hedwig and says, ‘Hey! Why don’t you do this project!’” he says. He wants to split his time between New York and Los Angeles because he “couldn’t live without either city,” and he’s enjoying spending time outdoors in New York this summer — in the park, biking, at restaurants, etc. One thing he can’t wait to do with more free time is focus on his writing.

“I love, love, love writing. I’m not saying I’m particularly good at it, but I do love doing it,” he says. “So for better or for worse, I think in my free time after Hedwig I would really like to go back to it, whether it’s cleaning up old stuff or creating new stuff.”

But just because the last thing he wrote was a pop song for a TV series, don’t think that’s the only thing he can do. “At the end of the day I am a mercenary,” he says. “Variety is the spice of life, so I like changing things up and being able to shift and flex as many different muscles as much as possible because it just makes everything else stronger.”