“I feel the sexiest I’ve ever felt before in my life.”

Corey Cott could be talking about a lot of things. With an entourage of adoring fans from his run as Jack Kelly in Newsies, the actor often feels like a member of One Direction when exiting the stage door. But while he’s grateful for this slew of screaming admirers, Cott feels his “sexiest” onstage in Gigi. 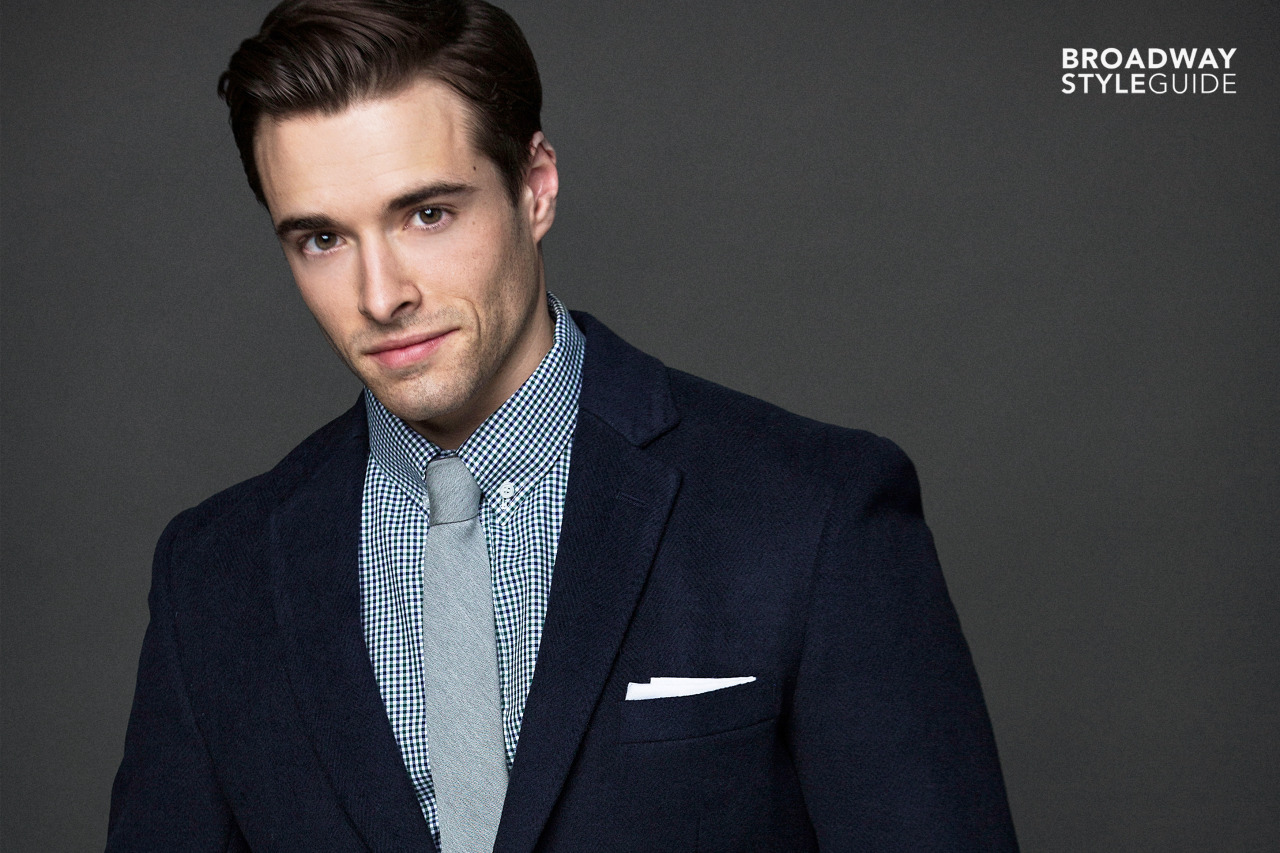 That’s in large part due to Catherine Zuber’s lavish costumes for the turn-of-the-century story about a young courtesan living in Paris, in which Cott plays man-about-town Gaston who woos Gigi.

“I wear this beautiful leather coat when I sing the title song,” Cott says. “I don’t even know how much it costs — more than I’m worth.”

However, on a dinner break from tech rehearsal at the Neil Simon Theatre, where the revival of the Alan Jay Lerner and Frederick Loewe musical opens on April 8, Cott looks comfortable in a Gap t-shirt, jeans, and Nike kicks. He exits the stage door eating a slice of red velvet cake — “It’s one of our ensemble member’s birthdays,” he says — and we walk toward ninth avenue to grab something to eat.

He’s enjoyed playing characters like Jack, who is “much more brave and charming” than he is, and now Gaston, who Cott continually compares to Justin Bieber — not in actual behavior, but in the way people respond to his behavior, which is to say, “obsessively.”

“I think I made these girls think that I was this really brave, charming, suave, daring, dangerous guy, and meanwhile, I’m like this goofy idiot who likes to make stupid videos with my friends!” Cott says with a laugh. “I don’t know, it’s funny.”

Though Cott is selling himself short. While he believes his onstage personas have earned him his following, his easygoing personality and natural smile can make anyone swoon. Part of his appeal is his utter unawareness of it.

Cott joined Gigi about a year ago when director Eric Schaeffer, producer Jenna Segal, and adapter Heidi Thomas approached him for a meeting. In the 1958 film version and the subsequent 1973 Broadway mounting, Gaston was much older, but the team, with Thomas onboard to update the story, wanted to remove the idea that 35-year-old Gaston was preying on 16-year-old Gigi and changed their ages 25 and 18 respectively.

To prepare, Cott watched a lot of George Clooney videos — young Clooney to be exact —to learn how to channel the celebrity’s affability and charm, and he also took inspiration from Richard Gere in Pretty Woman and Sean Connery as James Bond. Though, he wanted to bring as much of himself to the role as possible since it’s an updated version of the part. One thing he’s definitely bringing is some mean sideburns. 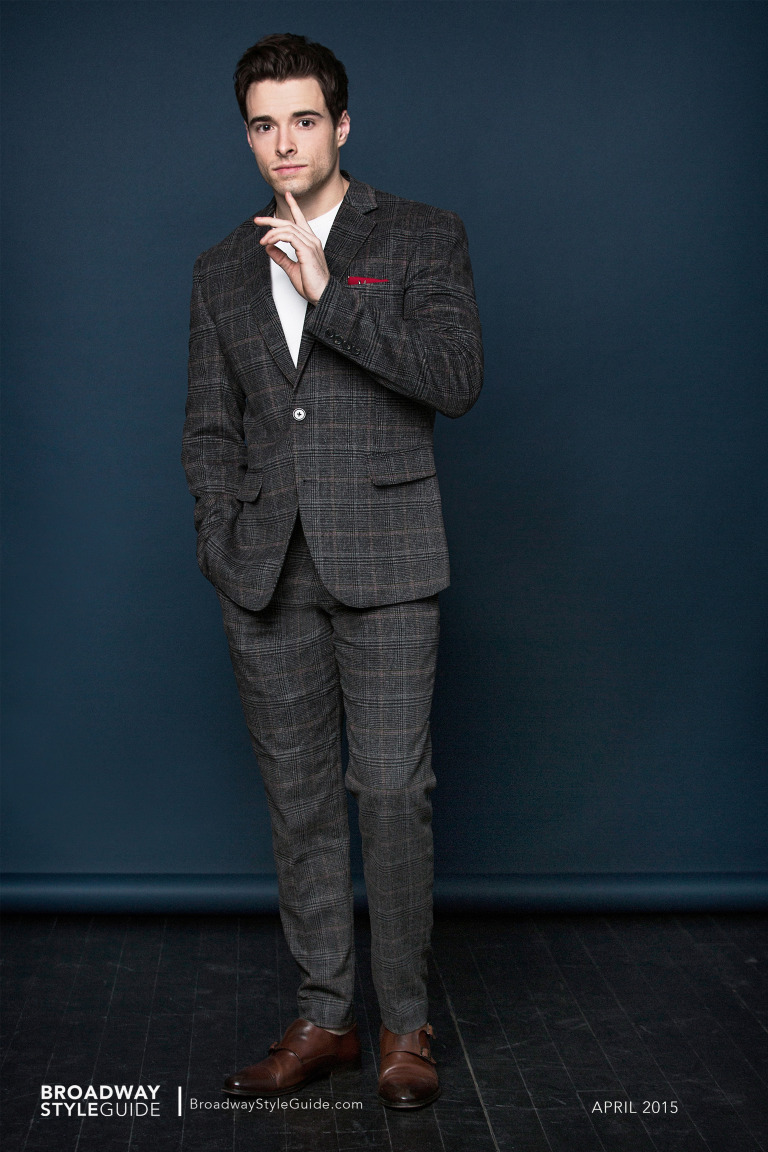 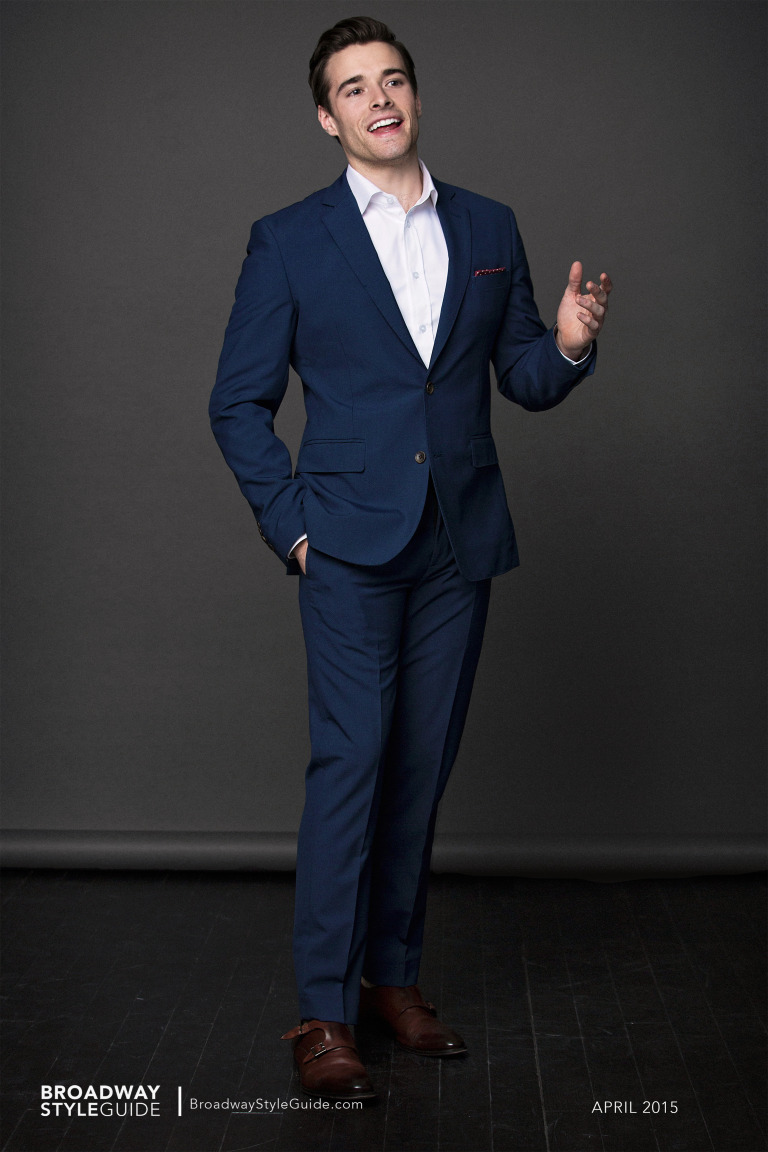 “Most people don’t like ‘em!” Cott says, stroking his face. “I wanted to grow a goatee or something, but they were trying to keep me as youthful as possible — to keep away the perve-y vibe, I guess.”

However, Cott doesn’t have to worry about maintaining his facial hair, and admits that he’s never paid for a haircut in the three years he’s lived in New York as he’s always been in a show. He moved to the city the summer after he graduated from Carnegie Mellon and made his Broadway debut in Newsies that August.

Cott also doesn’t like to worry about fashion and prefers when others dress him for openings and special events. While he keeps obsessing over the intricacies of Zuber’s costumes — pocket watches, gloves, and top hats, oh my! — he admits he’s not much of a clothes connoisseur in his daily life.

“Fashion is amazing; I have such respect for it,” Cott says. “But it’s not something that I naturally care about. I appreciate it, but I wear the same pair of jeans most every day — clean of course!”

He does take a moment to pat himself on the back for recognizing Michael Kors when the designer came to see Gigi during the musical’s pre-Broadway run at the Kennedy Center in Washington D.C. “My glasses are actually Michael Kors, and I bought a purse for Meg, my wife, because she wanted a Michael Kors bag,” Cott says. “I’m expanding my knowledge!”

Even though Cott says he doesn’t have a natural inclination toward aesthetics, he is adamant about fit. When asked if Meg shops for him, he says no because he’s so particular about the way things look on, quickly adding that he values her opinion on what he wears.

“I’m just the kind of person who needs to be there and try it on and see how it fits. Even if there’s the same exact T-shirt in another color, I still need to try that color on just to see what it looks like,” Cott explains. (He hates online shopping for this reason.) “If I’m going to invest in something that I’m going to be using everyday, I want to experience it before I just get it, you know?”

He shops “pretty classic, middle-tier men’s clothing,” like Zara and Banana Republic, and admits to a weakness for J.Crew. However, he will spend good money on the perfect pair of boots. “Like Red Wings or just good leather construction boots,” he explains. “When a guy’s wearing good boots, I notice them. Even if they’re a person I don’t know in an airport or something, I’ll be like, ‘I love your boots!’”

A unsolicited compliment from Cott could make a anyone’s day, and while he’s admittedly still getting used to his rockstar status, his Gigi co-star Vanessa Hudgens could teach him a thing or two about fan followings. “She’s become like a sister,” Cott says of the High School Musical star. “She is so easy to talk to, and she’s not in anyway a diva.”

The Disney Channel film came out when Cott was 16, and he was playing on the basketball team and performing in the school play at the time. “I am Zac Efron!” Cott jokes of the actor, who played Troy Bolton — a basketball star turned theater geek. He even confesses that he sang “Breaking Free,” the famed duet from the film, with a female classmate. “When I first met Vanessa, I showed her, and we laughed so hard,” he adds. 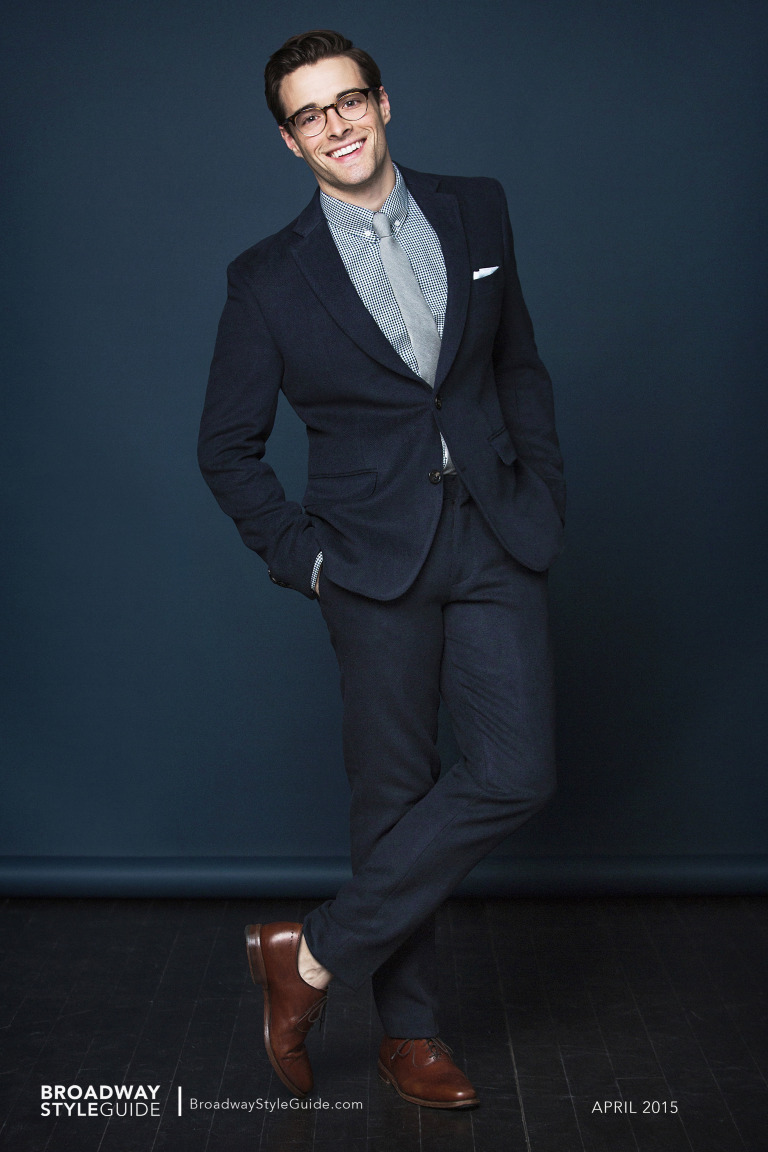 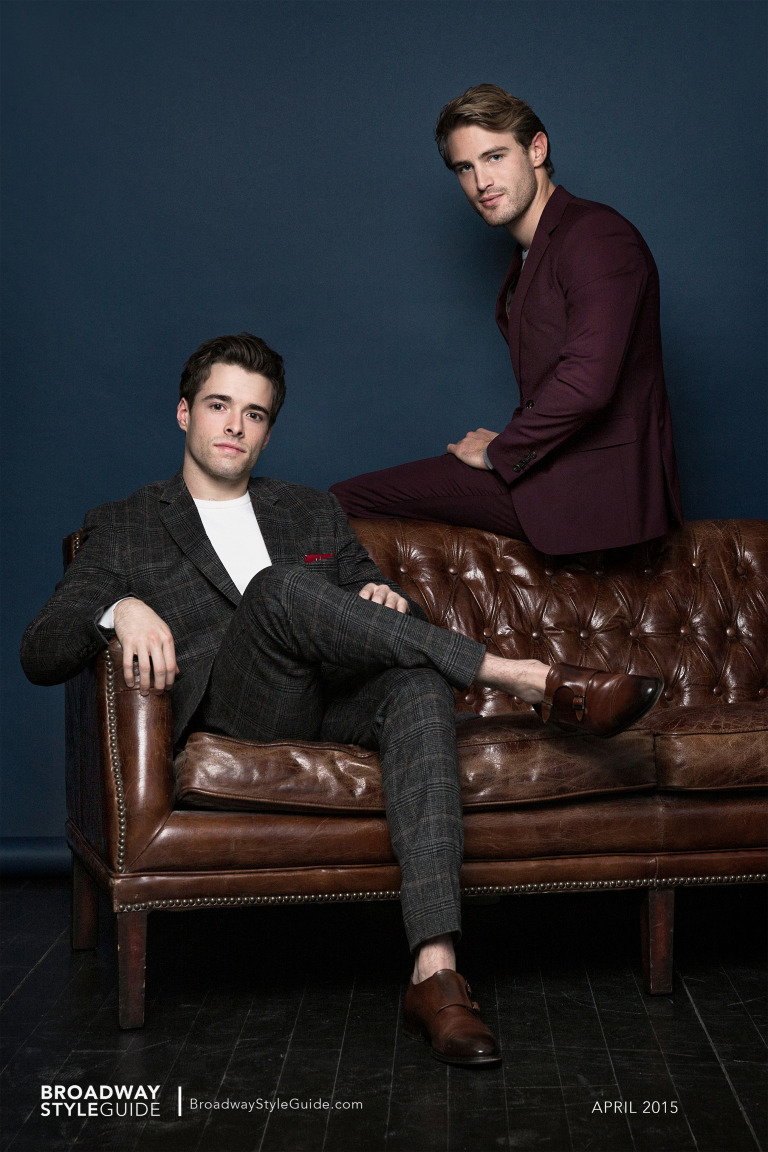 Cott goes on the pontificate about how entities like High School Musical and also Glee and even YouTube have made musical theater more accessible to the masses, and shows like American Idol and The Voice have changed how we view talent.

“I don’t know if musical theater is as prestigious as it used to be, you know? Because I think the ability to act and sing has gotten diluted a little bit; it’s everywhere,” Cott says. “Like I fully support High School Musical and Glee and all that stuff. It’s just changed it.”

And that’s why Cott couldn’t be more grateful to be where he is right now: originating a leading role in a show on Broadway. With seven minutes left before rehearsal starts up again, we wrap up our dinner and head back toward the theater. Although rehearsal will go on until midnight that night, he seems to be rushing to get back to the grind, to be a part of musical theater history.

“There are moments in tech when I just sit back and look at the Neil Simon and think about all the shows and all the people that have breathed in this air and sung in this space. Like Ethel Merman played Anything Goes in that theater, you know? In the same theater that we are performing in! That’s amazing,” Cott says, gushing. “It’s this very visceral, spiritual feeling. That’s the beauty of Broadway. And so for me, to be originating a leading role in musical and not be an A-list celebrity, is the biggest gift ever, and I don’t really understand how I’m here sometimes. But I know I’ve been given a gift, and I feel like it’s my responsibility to use that as best as I can.”