As he strolls into the lobby of the Aria hotel on the Las Vegas strip, Kyle Dean Massey sends off a distinct West Coast vibe — jeans with a loose-fitting cotton tee, aviators, Tom’s slip-ons, and a slightly styled head of what he refers to with mild frustration as “Pippin hair.”

“I always feel like no matter how hard I try… it always ends up looking like I just woke up,” he says of the contractually obligated hairstyle he has maintained during his run with the show.

Massey is ending his stay at the Aria, where he has been living while performing as the title character in the North American tour of Pippin. Tomorrow, he will meet up with the company for their next stop in Tempe, Arizona, just in time for a quick tech rehearsal before their first evening performance. But today, he stayed behind to go on a joyride to a dried lakebed in the Nevada desert in a ’59 Pontiac Thunderbird convertible.

The first thing on my mind as we get to know one another is what to call him: Kyle or Kyle Dean? “Always Kyle Dean!” he responds quickly with a distinct Southern twang, a not-so-subtle reminder that Massey grew up in Jonesboro, Arkansas. Massey’s Southern charm combined with boyish handsomeness and effortless tenor, have landed him steady work as a leading man on Broadway.

Many of his fans know him first and foremost as Wicked’s “winky” prince, Fiyero, which is not surprising considering both the show’s passionate following and Massey’s long-standing relationship with the production. Between the first national tour and multiple stints with the Broadway company, Massey has stepped into Fiyero’s knee-high leather boots (and tight white pants) so many times that he has actually lost count. “I think maybe 8,” he says with more than a little uncertainty.

When asked if he ever tires of the role, Massey grins and deflects, saying that it’s difficult to get tired of such a cushy role. (Fiyero spends a whopping 30 minutes on stage and leaves much of the heavy lifting to his green and pink co-stars.) He’s also developed close ties to the Wicked company.

For almost 10 years, I’ve been going back [to the Gershwin],” Massey says. “Ninety percent of the same people are still there, and they have gotten married now and have kids. It almost feels like I’m going home to Arkansas.” 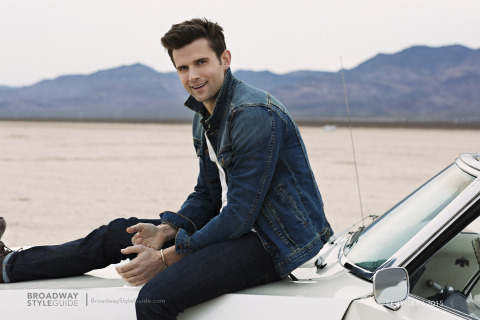 Massey says, slightly hesitating, he was a “good” kid growing up in Jonesboro. Mostly, it was because there wasn’t a lot of trouble to get into and he didn’t have a lot of free time. With a bit of prodding, he also reveals that his high school classmates voted him “most talented,” an honor immortalized in the pages of the Jonesboro High yearbook. But the talent his classmates noted may not have been of the musical variety. “I would never have called myself a jock, but I was definitely an athlete,” Massey says. That’s right. Before discovering his passion for theater, Massey was a nationally ranked competitive swimmer nurturing Olympic dreams and abiding by a strict two-a-day practice schedule.

It wasn’t until the middle of high school that Massey began to explore his artistic talent. “I didn’t know what Broadway was,” Massey says of his limited knowledge of the arts growing up. “I knew what musicals were, but I didn’t realize that Broadway was a thing.” If you asked Massey to define “Broadway” at the time, he would have said it was just a term thrown around in radio ads for the shows that played the Orpheum Theatre in nearby Memphis.

Massey laughs when he is reminded of this former misconception, but then he quickly points out that for huge swaths of America, this is likely still the case. When he visits home, the people that he runs into ask if he’s still up in New York doing “those plays and stuff.”This question is often followed by a conciliatory look and assurances that one day he will make it to the big stage at the Orpheum.

At the other end of the spectrum, there are the super fans who are very aware of Massey’s rising stardom and they have followed his career from the national tour of 42nd Street that earned him his Equity card, to his big break in the 2004 Off-Broadway hit Altar Boyz and his subsequent starring roles in Wicked, Xanadu, Next to Normal, and Pippin.

While the wayward, coming-of-age youth has been his bread and butter for a number of years now, he acknowledges his expiration date on the type may be approaching. “I’ve been able to play some really great roles that I was honestly too old to play,” he explains. “I mean, in Next to Normal I was playing 17 when I was pushing 30.”

Although Massey is a far cry from old, after performing the physical feats required of him in Diane Paulus’ circus-inspired, Tony-winning revival of Stephen Schwartz’s Pippin, anyone over the age of 30 must empathize. “I’m definitely a 33-year-old man, and this show makes me feel like I’m a 33-year-old man,” he says. Unlike Fiyero, Pippin is onstage almost constantly through the show’s two-hour-and-forty-minute duration.

To stay in shape, he swears by healthy eating habits, infrequent partying, and lots of rest. In fact, he jokes that within the touring company of Pippin, which has a cast significantly younger than the Broadway production, he is likely seen as a bit of a grandpa. When the cast goes out for post-show drinks, he generally declines in favor of Netflix, tea, and a warm bath. “My muscles hurt!” he adds.

Next time we speak, this time by phone, Massey is true to his comments about diet. He’s poaching a chicken breast as we speak. He’s just settled into his new temporary quarters in Washington D.C., where he will spend the holidays during Pippin’s three-week engagement at the Kennedy Center.

Today, we discuss style. He swears by Levi’s jeans, and plain t-shirts from AllSaints because they “just fit right.” Comfort and authenticity are the pinnacle of his fashion choices. “The second I feel like I’m playing dress-up I start saying no, no, no, no,” he explains.

However, he is also quick to admit that he is not fully responsible for all of the things in his wardrobe. In fact, he readily outsources shopping duties to friends, stylists and others around him. “My first opening night, I felt so great in what I was wearing and had this realization, ‘oh my gosh, people do this for a living! You should let them do it!'”

While on tour or spending time in Los Angeles, he consciously changes up his look to adapt to the local aesthetic. “It’s almost like when you’re friends say you’re going to meet in Williamsburg for dinner, and you’re like, oh my god, now I have to dress up so I look like I’m going to Williamsburg,” he explains, making an exception to his no dress-up rule. “But in L.A., you can wear a nice pair of sweatpants to dinner and nobody will think twice about it.”

Shortly after our final conversation, Massey concluded his contract with Pippin. Without skipping a beat, he headed to Tennessee where he is currently shooting a recurring role on ABC’s country primetime soap, Nashville, which stars Connie Britton, Hayden Panettiere and fellow Broadway favorites, Laura Benanti and Will Chase. Massey is tight-lipped about his character, Kevin Bicks’ storyline aside from saying he is a gay singer/songwriter and that he should start appearing in episodes in late February.

Everything about my character seems like a perfect fit for me… I feel a real connection to the music and the culture that is portrayed on the show.” 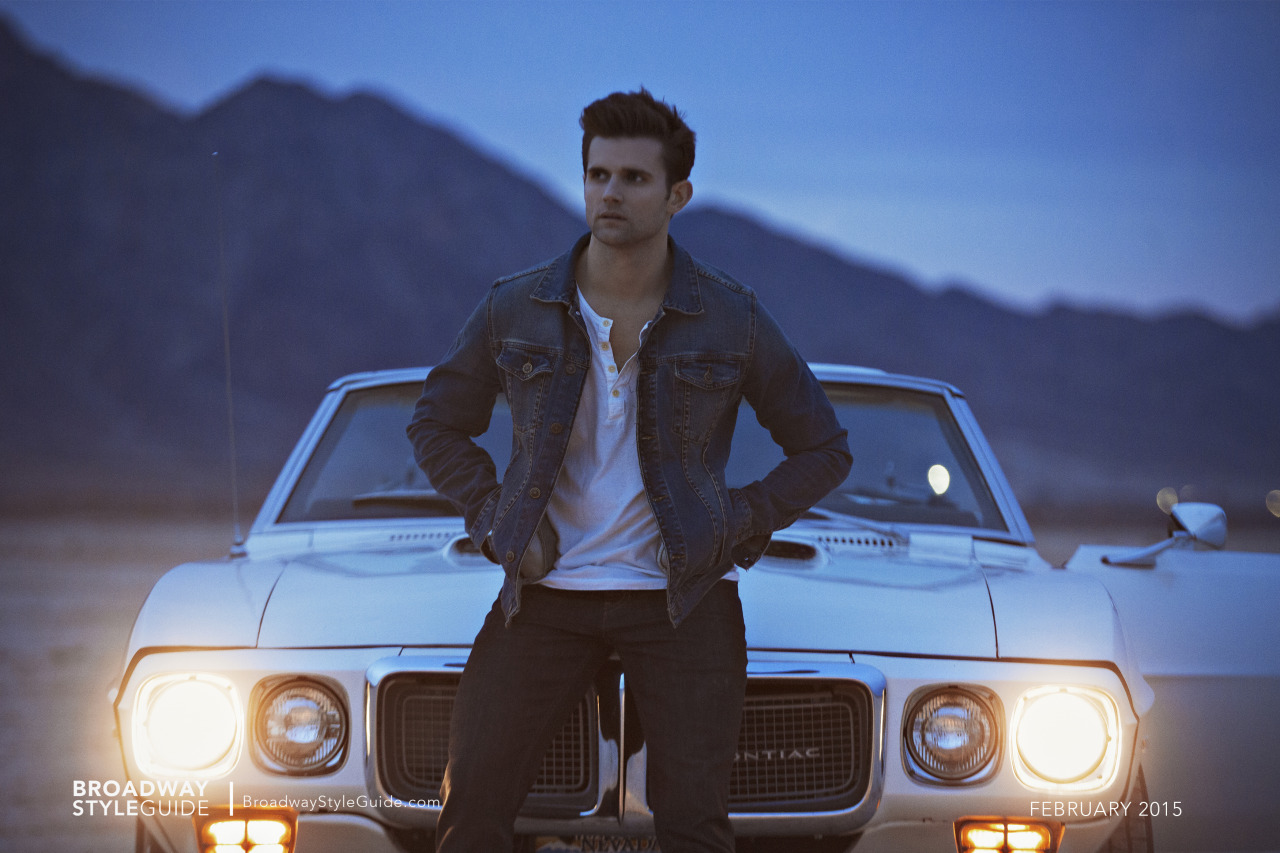